“The emphasis is on the adventure, the exploration, not the explorer per se. Just a few days ago, Michael Mornard, who played in both Greyhawk and Blackmoor before D&D was even published made this very interesting comment on Finarvyns ODD74 forum ‘… And that was the first year or so of how the game grew… ‘Hey, who wants to explore MY dungeon?’ The game was centered around the referee, and the idea of the game was to explore the referee’s world. At some point this changed. The mindset became, ‘We want play being a bunch of heroes, who can we talk into refereeing?’ The game became centered on the idea of the players’ adventures rather than the referee’s world.'”

If you read the whole post you will see that the “board game” they are talking about here is the wilderness map from a game called “Outdoor Survival” – and produced by an entirely different company: Avalon Hill (AH). Legend has it that this same company actually turned down D&D when it was originally submitted to them. Others have remarked on how striking it is to note how D&D’s original rules actually required you to obtain a part of a game produced and owned by an entirely different company. No one would even consider shooting business to another firm like that now. This reveals the true, amateur origins of D&D – a quality of pure love, unmarred by crass commercialism – that continues to inspire those who have returned to, not only the rules and format of the earliest forms of the game, but also its founding spirit and sensibility. 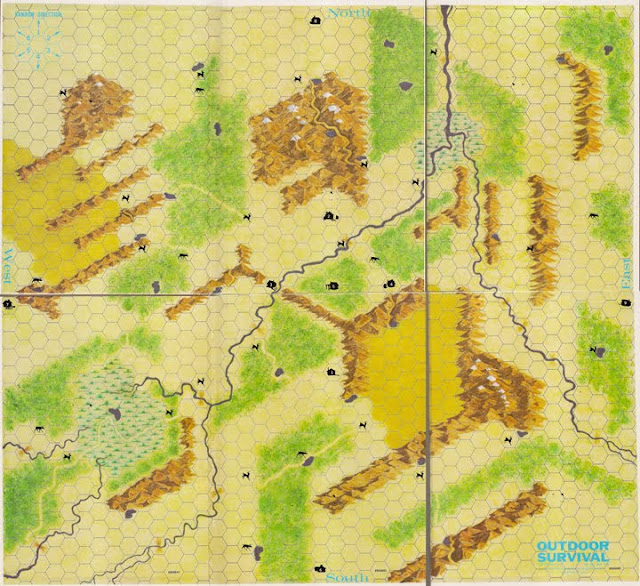 I myself recently bought a vintage copy of “Outdoor Survival” to use in seeking to play the very earliest version of the game, and so I was unsurprised to find other “old school” bloggers doing the same thing – sometimes converting the map, using online tools, into handy jpegs and pdfs (see examples here and here). I, of course, admire the finished products as well as their innate desire to do this in the first place. The original map is overlaid with hexagons, and the map’s scale is that each “hex” is five miles across. A long, and what looks like a fairly substantial river, runs down the center of the territory. There are extensive mountains in the north.

The original D&D rules called for each section of the wilderness the players traveled into to be explored and mapped. Sometimes they would encounter monsters – and these monsters might be in their lairs or scavenging outside of them. naturally, there were tables to be consulted that, with dice rolls, would indicate what kind of monsters were present, whether they were in their lairs or not, how many monsters there were, how strong the monsters were, etc. Each five mile hex might contain a monster or not. Sometimes, by luck, the characters would miss the monsters present entirely. At other times, day or night, they might encounter one collection of creatures after another.

The geniuses at the “Judges Guild” greatly expanded on these tables and included a vaster array of possibilities. Using their ideas, preserved in the classic purple booklet called “Ready Ref Sheets” (pictured above), you could go into greater and greater detail about what the monsters’ “lairs” looked like, what kind of flora and fauna were present in each hex, etc. In the original games, if the players happened across a hex with a “cabin” on it – that was a town. They might buy supplies at the town, or pick up information. You’d have to determine how big it might be, who was running it, etc. In other cases, when the players came across a hex with a “pond” marked on it, they would have encountered a fortified castle or “keep.”

Here, things got more interesting. Good or bad, chaotic or lawful, the men at the keep or the castle would expect armored characters to engage in a kind of ritual combat – jousting or some other test of strength. If they won, they got money, not inconsiderable hospitality, and, of course, prestige. If they lost, they had to give up armor, perhaps other possessions, and were turned out.

I admit that, perhaps fortified from reading a whole bunch of recently reprinted vintage Prince Valiant comic strips, I can totally see how this would play out. It would be especially interesting, I think, if the people running the castle or the keep were lawful and “good.” Their alignment, or basic moral operating code in the terms of the game, would not prevent them from demanding a “tourney” and booting the characters out, sans armor, if they lost it. They’d be, I suspect, as nice as they could about it, but the rules for wandering characters stumbling into to their turf would be be applied regardless of their other commitments to “goodness” or “order” or “justice.” This is the way things worked in their world. If you couldn’t hack it, you shouldn’t go wandering around getting into trouble.

The other people at the castle, or keep, would enjoy the spectacle. This kind of event would break up the monotony of their existences. There might be a fair, complete with colorful bunting, displays of coats of arms, wagering, banquets, toasts, etc. Some scullery maid, or hostage princess, might secretly root for the player’s contestant to win. Most of the people, of course, would be cheering on their “home town” hero. He would have to have an advantage, or he wouldn’t be selected to defend the honor of the keep in their first place. You don’t get to stay captain of the guard if you let some pack of wandering nitwits beat you at a joust. I think the people running the castle, or keep, would use these occasional tests, instigated by the arrival of unknowns, as a kind of Darwinian selection process. I know I would.

If a magic user controlled the keep and the people there, then he or she might send the losers of the joust (and their friends) on a geas. Some high level magic users, in the game, really did have the power to command those losing a match to go on a quest for them – and they’d have to try to do fulfill it no matter what. If I was the magic user running the keep, and these guys lost to my captain of the guards, or my captain of the hunt, or my head ranger of the valley, or whatever, then I would want to get some use out of them. Was there some cool chalice I had heard was hidden in a cavern to the north? Make them go and get it. Was there some group of giant centipedes annoying a farm to the south.? Make them go and kill them. These sorts of jobs would be good for them. They might really need some toughening up and some direction in life anyway. Maybe they’d learn not to run around the wilderness and get locked into situations like this. And if they came through, and did a good job, I might reward them. You know, give them some gold and/or a spare magical item I might have lying around. But, I’d probably safely conclude that their experiences along the way – and the way back (assuming they survived the journey) – would be their real reward.

Dave Arneson, the somewhat neglected co-creator of D&D, came out with his own role playing game that was based more on his own house rules and individual perspectives and preferences. I have not studied it in depth, but I have looked at his methods of randomly determining the nature of the dragons the players encounter. There are tables for seeing what the dragons looks like, and how strong they are, and how old they are, but also for determining their personality quirks and individual agendas. I started rolling up a few of these creatures and immediately saw how a random meeting with one of them would lead to something long and memorable. The players might want to be done with the dragon, but the dragon might not want to be done with them… Extricating themselves from this relationship would not be a simple matter. They might try to run, but I don’t think they could hide.

I love the idea of the plucky band of players moving across the original AH map, and having to cope with whatever the tables and dice happened to throw at them. At the end of this process, assuming there was an end, a “picaresque” narrative would be formed – not necessarily a linear one, but perhaps a more realistic or life-like story arising from the unforeseen chain of events. How many of our own life encounters are “random”? When people say, “Everything happens for a reason,” aren’t they trying to create some kind of meaning for themselves out a number of more or less random accidents?