Dungeons of the Amazon Queen… 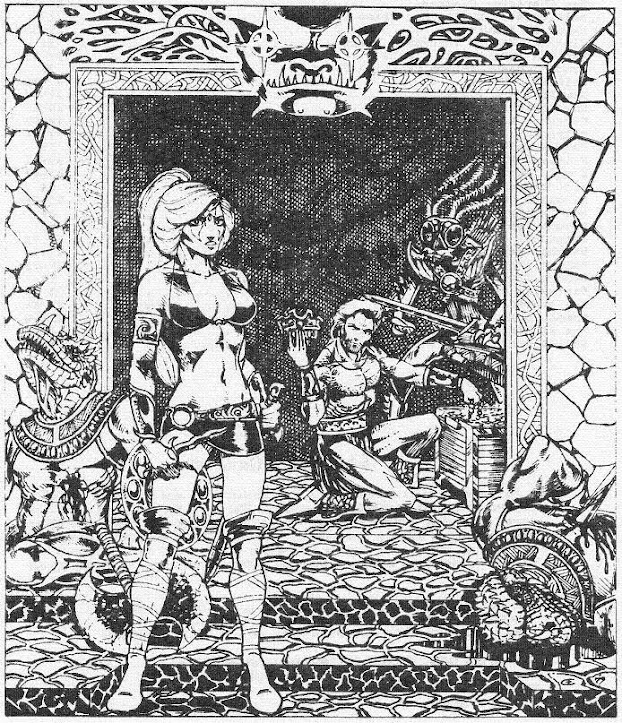 Are there Amazons in my OD&D campaign?

Yes. Yes there are.

While rolling up data on each of the “castles” and “towns” on the original Outdoor Survival wilderness map, I decided to place the Amazons in the castle at the very south of the map – they’re right at the pass through the mountains. The mistress of this small feudal estate, Chandra, is a “Lord” – according to the original table – which is a 9th level fighter. She has 8 champions as retainers. The “champions” are all 7th level fighters. In addition to their duties as warriors, the champions each supervise different parts of the estate’s lands and its population. 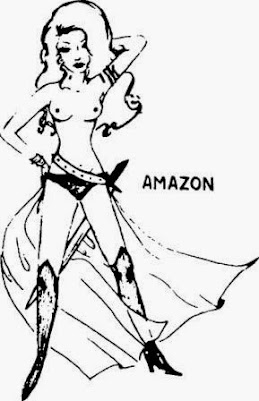 These Amazons cannot tolerate men and they keep a large number of female slaves – who are distinguished by their shaved heads. The slaves work as serfs in the fields and attend to the Amazons in the castle. Few are ever freed and escape is difficult. The better educated, or more refined, slaves work as artisans (weavers, potters, even bookkeepers) and household servants for the higher ranking Amazons (Chandra and her band of champions). The Amazons are all distinguished by their large size and strength – none of them has a STR of less than 16. There is some scheming among the slaves, but it is mostly to advance in favor and position within the castle’s hierarchy. The women doing manual labor have largely accepted their fate.

These Amazons are “old school” – meaning the are chaotic and hostile to the adventurers on general principles. Being fighters, they will demand a joust – single combat – with whichever of their numbers the players pick to represent them. These jousts can be conducted using the rules in Chainmail. The Amazons will all employ shields and, once they are past the 3rd level as fighters, they will never use any other armor. Chandra will send one of her champions into the joust – and she does this to keep them on their toes. The champions will not care what armor the players use. They are that confident of winning regardless. If the party’s designate loses the joust… the Amazons will usually try to execute the men in the party and enslave any of the female characters. If the party’s designate wins the joust, and the designate is male, the Amazons will drug him and use him to breed.  Chandra and her champions will reserve him first, followed by other women Chandra has determined to impregnate. They will keep any of the female progeny produced by these encounters and raise them as Amazons. They will expose any male child to the elements immediately. Any strong enough female winner, whose alignment is neutral or chaotic, will be entreated to stay with the Amazons and join their community. The Amazons will do everything they can to make this offer seem very attractive. 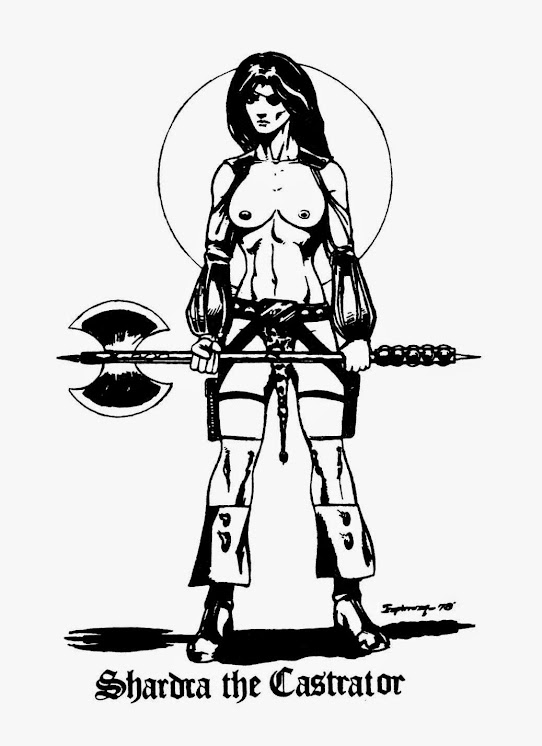 The Amazons have plenty of gold and use some of their slaves to do mining in the mountains to the south of their stronghold. Lawful female slaves are usually assigned to mining as punishment. Chandra possesses the “Amulet of the Amazon Mother” (see Arduin Grimoire III: The Runes of Doom) which she is loathe to use in most instances, like the jousts, and reserves only for combat with the other feudal estates on the southern plain. She views the occasional joust as a way of keeping her champions strong, and appreciates the value of the “natural selection” process these violent encounters facilitate. Chandra has consolidated her power in the southern mountains and she has a mutually advantageous pact with the demonic kings and dark entities who reign over the fiery regions below the area shown on the original Outdoor Survival map. The Amazons collectively hate all lawful characters, are immensely jealous and protective of their own power and influence over the region they dominate, and eschew all magic-users and clerics. They are exclusively fighters and tend to only respect other fighters – even male fighters, albeit grudgingly. They will respect powerful neutral clerics that can beat them in basic combat, revile lawful clerics, and tend to dread chaotic clerics. While well-served by their substantial number of female human slaves, the Amazons avoid the pitfalls of luxurious living by a regime of constant military drilling and training. Among the champions and their underlings there is a marked and consistently high level of esprit de corps. 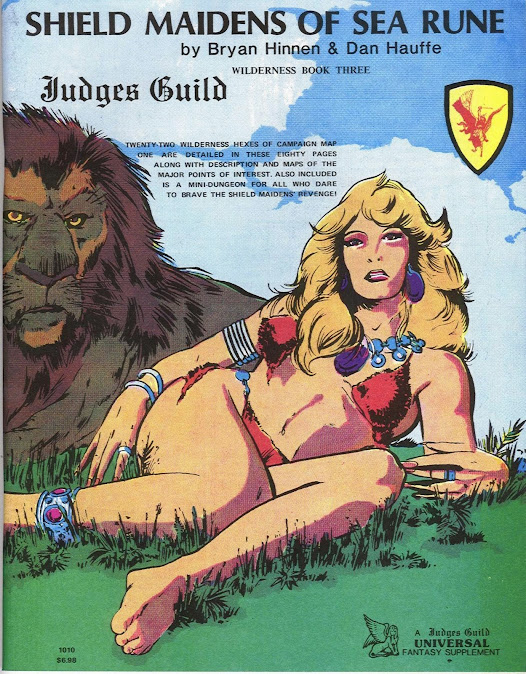 The party’s best bet to win in single combat is to have a dwarf or hobbit go up against one of the champions. Chandra’s retainer champions are all much larger than even the rest of the Amazons and tend to resemble giantesses. Shorter-than-average characters, with high levels of dexterity, will have s distinct advantage over them. This particular choice of “joust designate” can create other conflicts, since the Amazons will not want to breed with a dwarf or hobbit – as they want their daughters to maintain a large size and proportionate strength. Chandra rotates her eight champions through the joust opportunities. Those champions that win the jousts are rewarded with more privileges, higher rank, and acclaim. The losers are humbled and have to suffer with the accompanying loss of informal rank and some privileges. Any joust is a festival occasion for the castle’s extended population and these events provide a brief respite from hard labor for nearly all of the Amazons’ slaves.

The Amazons’ large castle is made of ancient stones quarried from the mountains and, despite its age, remains in very good condition. The Amazons will not hesitate to dispatch teams of slaves to do repairs to the masonry and other parts of their fortifications. Players with some experience in the campaign will compare this castle’s architectural style to other, similar structures they have encountered. There are extensive dungeons under the castle, including many levels that are not in use. Chandra has explored most of these chambered places herself and she is privately convinced that an entrance to a tunnel through the mountains exists somewhere at the lowest levels. She is unaware that one secret passage leads down to the lowest network of tunnels and underground passageways in the entire campaign – an enormous series of connected caverns and labyrinths that constitute the legendary “Great Wurm Road” (see Arduin Grimoire VII: Shadowlands). High level characters bold enough, and skilled enough, to be traveling these sunken and sepulchral highways may find themselves unexpectedly emerging in the Amazons’ castle.

4 responses to “Dungeons of the Amazon Queen…”