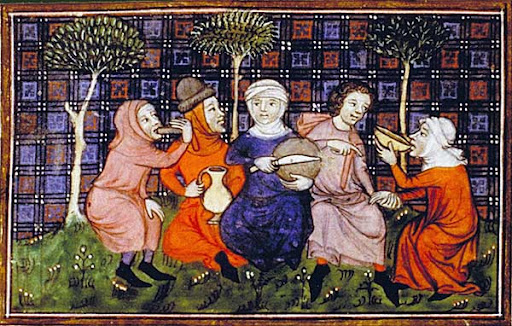 “Leaving his arms in the field, let no man go a foot´s length forward.
For it is hard to know, when on his way, a man may need his weapon.”

One of the difficult aspects of engineering a realistic alternative world, even a fantasy one, is dealing with the economics of food production. I confess that we never worried about food much when we played D&D in Junior High. People usually bought some food (“iron rations” – 15 gold pieces) when they created a character, and then forgot about eating after that. While this was convenient, it’s hardly realistic. In the sorts of medieval worlds D&D took place in, food – growing it, hunting it, finding it, eating it – would be extremely important and nearly all the population would involved in little else in many areas. 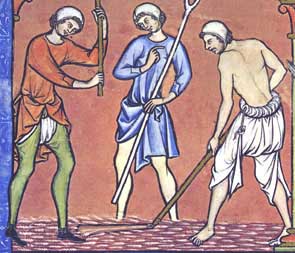 I have also had a hard time understanding where the food came from in various towns, cities, villages. Suppose the characters come across a lonely castle, or citadel, at the edge of some snow capped mountains. While certainly a picturesque moment, even quite a captivating one, I still have to wonder, now, where the people in the lonely citadel and/or castle are all getting all their food from. The mountainous and wooded terrain may be fine for hunting, but where is the rest of their food coming from and how many square miles are they going to need, per person, for both hunting and cultivation? The more people in the citadel, the more area they require.

It turns out that I was not the first person to think about this.

“The population density of an area will largely be determined by the civilization and tillable land within the area. There is 13.856 acres and 21.65 square miles in each 5 mile hex. Hunting tribes require one square mile per member while one square mile of farmland will support a population of 320. Agriculture requires a density of 30 per square mile for maximum utilization. A Village of 220 pure hunters would require a hunting range of ten hexes for support. A village of 660 farmers which farmed an entire hex would support an additional 5740 population group. The wilderness map assumes all hexes are lightly wooded excluding mountains. The woods shown are especially dense, requiring horsemen to walk mounts. The only true clear terrain hexes are those within and adjacent to the names of plateaus and plains. Tillable land is the farmland cleared by farmers. Any civilization above two has 10-100s tillable land within the hex in which it is located. Thus, agriculture hexes will support a population of 640 to 6400. When entering a hex containing a village, tower or castle, a 6 on a six-sided die indicates that the feature in question has actually been found, a 5 indicating that a small farm or hamlet (10-60 population) has been found instead. Players following a road, coastline or river that intersects a village, negates the necessity of ‘encountering’ same.” 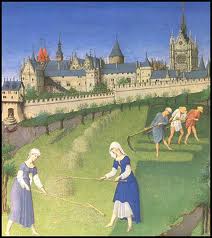 The passage above is one of the reasons I love the JG stuff so much. They were putting this much thought into it back in 1978 and earlier.  A “hex” is 5 miles across.

Despite this fine summation, I have to wonder how good the JG’s own productions were at sticking to these formulas. As I look, again, at some of the famous “Wilderlands” maps and guides – the JG’s sprawling, and famous “campaign area” – it seems that they may have played a little fast and loose with the stats. The various City States described in the JG product line do not seem to me to have the agricultural support they need to feed their large populations. Nevertheless, I think we can go back to these rules to get a better grasp of what food production and population really entails.

As I picture it, the characters would come across areas “cleared” of monsters by the rulers of any populated zone. Were I ruling a little castle or citadel, I would post monster skulls and skeletons at the boundaries of my area to warn away any wandering creatures that might have a mind to harass my peasants working in the fields for me. You would know you were approaching a “civilized” zone by the sight of these gruesome, unambiguous and cautionary monster trophies.

Naturally, a roving guard of warriors would be necessary to keep order among the peasants as well as to protect them from predation. Some more intelligent monsters might see the heads of their kind posted on spikes at the outskirts of the area, take the hint, and find other, safer places to hang out. It would be my duty to make sure that word got out, or a vibe developed, that my little castle area, and its surrounding woods, fields, and water sources, were anything but a healthy and safe place for the monsters to get too close to. Everything harboring evil intentions would quickly get the point that me and mine were not easy pickings.

Other, less intelligent creatures might occasionally blunder into a populated area and they would need to be quickly and skillfully eliminated by my band of local warriors. This fighting force of mounted guards would have to be paid money, and that money would come from taxes. If a peasant wants to peacefully farm his little area, – and not have to always worry about giant centipedes carrying him, his livestock, and his little family away –  then he has to pay for it. There’s no getting around this. I think the most dangerous areas to farm would be at the edges of the cleared area, but these border areas, which might prove tempting to the braver of the beasts, would be where I would make sure my guards would be present often. They don’t get to loaf around the castle and collect a salary. If one of the younger guards flirts with your daughter and helps himself to an apple off one of the trees in your carefully tended orchard, whenever he and his partners come riding through on their patrols, just relax and be glad he’s out there keeping the bugbears, orcs, and lizard-men, who may be lurking just over the next hill, at bay. 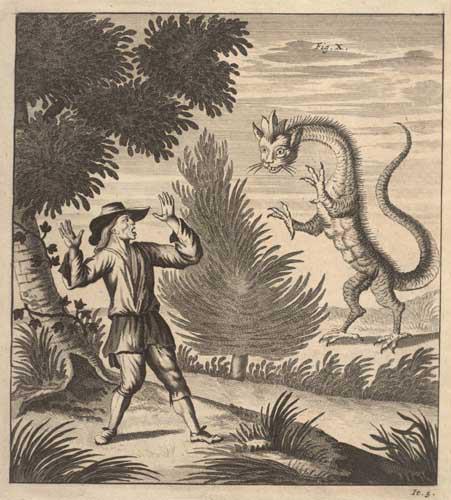 The other issue, related to the above, that has vexed me somewhat, is looking at the abilities and powers of most of the population. None of these people, for the most part, should be very high powered. The AD&D “clone game” OSRIC notes:

“Most of the NPCs encountered while adventuring in urban or civilised countryside areas are normal folk, with no adventuring profession such as fighting, spell-casting or thievery.”

In other words, don’t expect the peasants producing the food to be able to do squat. This makes total sense, but it is difficult for many people to remember. In an effort to populate their game environment with interesting challenges to the players, a kind of “power creep” starts. Suddenly, every peasant in every little hovel is a 4th level fighter, with a +2 sword under his cot. No. No. No. If they had this kind of power, they wouldn’t stay a peasant in the fields. They’d be off looking for dungeons to explore, monsters to kill, and would instantly be out gathering experience and adventuring like the players. The only way an agricultural community like this makes sense is if the peasants are – for the most part – weak and only good at one thing, if that. It seems difficult for most DMs to keep this foremost in their minds, because they want to preserve “play balance.” It’s not a good idea if the players, as they wax in power as the game progresses, can just run roughshod over nearly all the peasants, but this is what often happened. The “balance” has to come from giving the players challenges at their own level. In the fabled D&D “end game” – which rarely, if ever, was played – the characters become responsible for their own group of “0 level” peasants and have to figure out ways to tax and protect them themselves.

I like the ecological balance that has to exist between the monsters and the human outposts. This kind of struggle seems to define the technological limits of the game’s background. No one area, or fiefdom, or little kingdom, can develop too much, or advance too far, before the monsters come in and reduce everything to ruins and disaster. The more you work on developing an livable, productive local economy, the more tempting it looks to the forces of evil – and the more unstable it can become as the threats to it start to mount.

This is one reason why I don’t like the Gygax-style campaigns – which seem like these present, practical problems are all totally ignored. On the one hand, the Gygax model insists that characters wandering from place to place might encounter monsters. On the other hand, he has any number of complex political entities who can build large armies and wage war. This makes no sense. If you have enough of an army that you can keep paid and fed, then you can, and should, use that army to clear away all the wandering monsters – thus forever ending their threat and presence in the game. If you don’t have this ability, then you have lonely little outposts of civilization fighting off dragons and zombies – with really, really dangerous and unprotected areas in between – and no grand territory and no large army to defend it and define it.

There has to always be, as I see it, a precarious balance between efforts to carve out enough stable, protected areas for decent food production (tillable acres), and efforts made by the monsters and evil forces to sweep all of that away. Add in the disease elements and risks that D&D co-creator Dave Arneson kept pushing, and it’s easy to see that the human forces are really going to be up against it. Even in the City State of the Invincible Overlord, there was a lot of disease present. Life is nasty, brutish, and short. Overcoming that, even temporarily, would be what the game would, and should, be about.