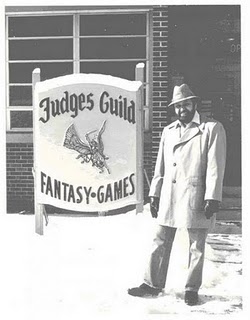 As the whole D&D scene became more popular, and the commercialization frenzy grew to its inevitable breaking point, whole sections of the cruder, earlier phase of the hobby drifted out of view. In my estimation, the most important tertiary aspect of the original hobby were the supplements, game aids, and adventures produced by the late Bob Bendslaw and his company called “The Judges Guild.” 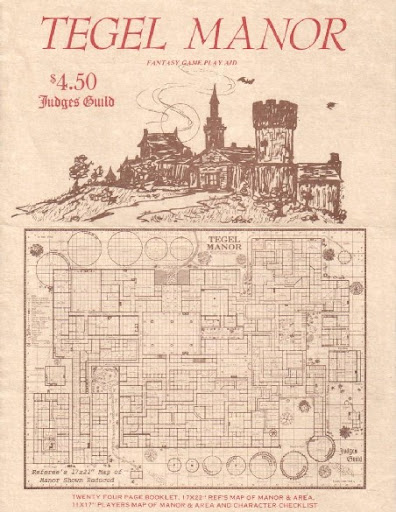 Originally, the “Guild” was something you subscribed to. They would send a module and a newsletter together, and these aids would later be repackaged for general sale. Bob got in at the start of the D&D thing, and his stuff was the first to be “approved” – via a contract with the game’s owners (TSR) – for the game.

I loved all the JG stuff more than that produced by any other company – TSR included. In many ways, however, Bendslaw’s product’s virtues might not be obvious at first glance. His booklets were designed before home computers were standard, or as functional, as they are today and his early pieces were always strangely illustrated using primitive and amateurish line-drawings and what could only be called “sword and sorcery” “clip” art. Little tiny mermaids, barbarians, and other mythological creatures, rendered in black and white, would be stuck seemingly haphazardly onto the pages. But the real “look” of the JG publications was that they were dense. I think this is what got to me the most. Type, again in that pre-Internet typeface, was heavily packed in on each and every page. It was, often, difficult to read because there was so much there. I got the idea that Bob and his friends were like the Jack Keroaucs of D&D – they were just bursting with complex ideas and thousands of characters and locations that they couldn’t wait to contain themselves – so it all came bursting out onto these hard-to-read pages. 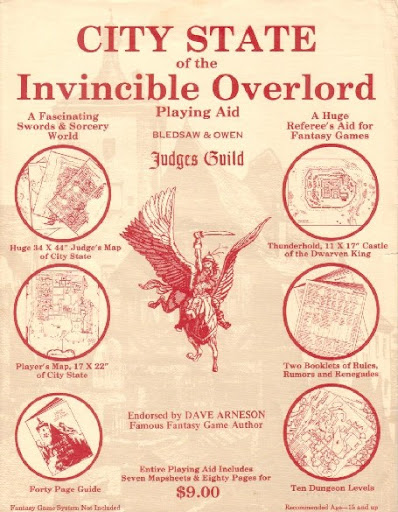 The first, and arguably most famous of the JG publications was its magnificent D&D urban design: The City State of the Invincible Overlord. I believe I had one of the very first editions of this “campaign” setting and though I spent a lot of time reading it, and having my friends play in it, I never came close to plumbing all its depths. Trust me, you could get lost in that thing forever. Streets were named and described, little shops and their owners were detailed, temples to various gods were included, there were dungeons underground, a goblin “reservation” on the side, it was crazy! And it just went on and on. No one, to this day, has ever developed a D&D city that matches this. It stands alone as a singular achievement. And all for only $9! Around the city, Bob and his gang made wilderness areas, oceans filled with strange islands, and even more towns, castles, etc. It just seemed to never end. You constantly got the idea that they had more things to add, and would keeping squeezing in extra little descriptions, characters, and tables for as long as they could.

Part of the appeal in these aides was Bob’s obvious love for indexes and tables. He was first to make a “screen” for game masters to use to hide their maps and materials from the players. These have since become standard and ubiquitous for all role playing games. When we started out playing D&D, we used folded out record album covers. I was an “early adapter” of Bob’s iconic yellow cardboard screen and I used the green one he did for Traveller too. On the player’s side of the screen, there were tables printed for them, and on the master’s side, there were tables for them to use. But Bob’s table creation went far beyond these simple recapitulations of already existing rules. Everything he issued had long and complex encounter tables. You could use these tables, for example, to randomly roll dice and determine how many walls a castle had and whether each of those walls were safe – or ready to fall over. If you discovered ruins, you could find out what kind of “ruins” they were – table after table was there telling you what the condition of the ruins were, who was guarding them, etc. You could use the tables to determine arrests, trials and punishments – and even determine accusations and the effect of bribes. One infamous table let you discover, again by dice rolling, what a randomly encountered woman’s measurements were. Many of these wonderful and elaborate sets of tables were collected in a booklet called Ready Ref Sheets. Fortunately, like many of the original JG products, these are still easy to find and inexpensive. You can read a review of this particular JG book over here. The review doesn’t do it justice. 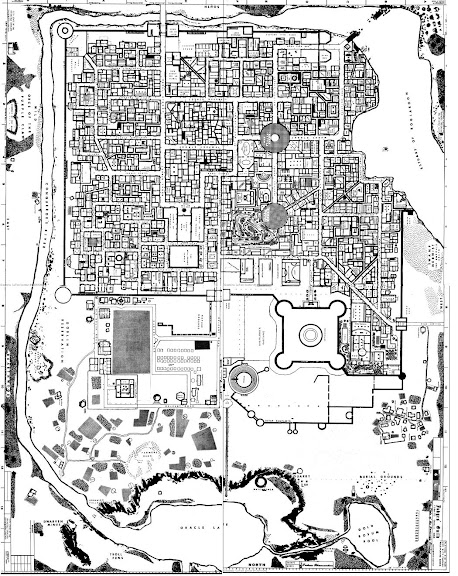 D&D, for me, always seemed to offer something that it could never really deliver on. My disappointment was probably my own fault – for demanding, or expecting, or believing – my God, how I believed! – that it could be, or become something it simply couldn’t.

For me, the JG stuff offered the most brilliant and fantastic horizons and, in the end, delivered on more of what it offered than anyone else did too.