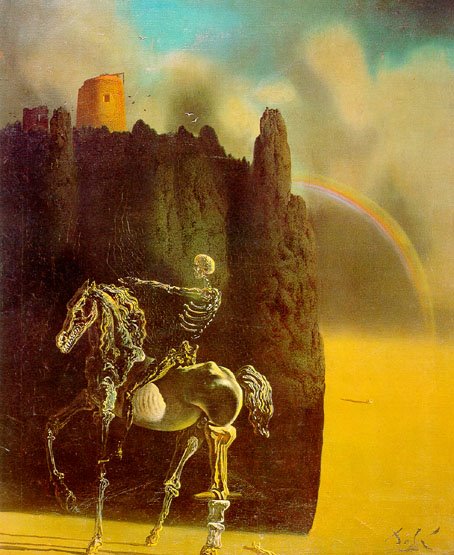 Like many D&D players from the ’70s, I had heard rumors about Hargrave’s unofficial series of supplements known collectively as The Arduin Grimoire. It was, I recall that we were told, “dark” and “crazy.” No one I played with had copies, but I detected a kind of dreadful aura surrounding it. The Arduin materials had a sort of sleazy reputation too. 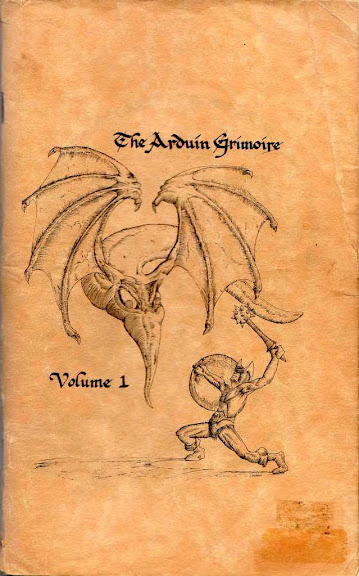 I recently happened to chance upon Geoffrey McKinney (of justifiable Carcosa fame), praising Hargrave’s work in the highest terms and suggesting that the first three Arduin supplements constitute a kind “Dungeon Master’s Guide” (DMG) for the original game. This comparison intrigued me and I ordered a copy of the original three supplements which had been reformatted into a single text with better organization and larger – in other words, legible – text. The original booklets had a tiny, smudged typeface and were quite difficult to read.

Going through this large, impressive, and quite hefty tome, I was amazed at how so much of it resembled the contemporary work I saw in the OSR. Hargrave was all about the tables. Zak S. has – rightly – complained that too many of the people writing game materials come across as frustrated novelists. They cram denser and denser descriptions into all their work. This bogs down play, distracts the DM who can’t keep up with all of it, and ruins any free flowing experience. I think these kinds of problems have aided, perhaps without it being recognized, the “railroad narrative” problem. Even classic materials that I appreciate deeply, like the City State booklets from the Judges Guild, suffer from this problem. But with Arduin, it’s one table after another. 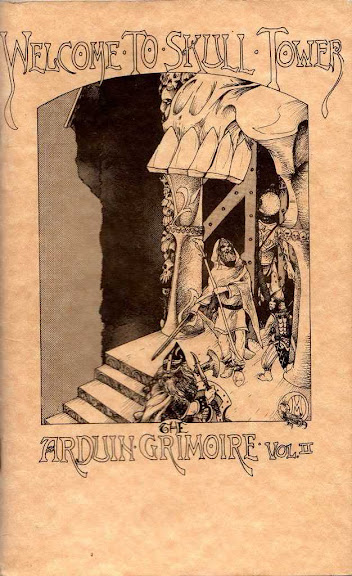 Zak S. has also noted that what’s important in any game are the details the DM remembers. Data you have forgotten and have to look up is, then, not important. So what sticks with you? Often times it’s the vivid and intense details – that’s what’s essential. Well, a lot of Arduin is vivid. Much of it is, therefore, quite memorable  indeed.

Another value of the Arduin supplements comes from the way they “flesh out” some of the numerical information in the basic game. What is the real difference between someone with a charisma of 9 and someone with a charisma of 10? It’s easy to envision a range of this characteristic on the classic scale from 3-18. But what does each number really entail? What does it mean for the character? Wonder no more – Hargrave provided a table. You don’t have to like it. You don’t have to use it. But he’s setting up a way to take the abstract dice roles and translate them into something tangible. 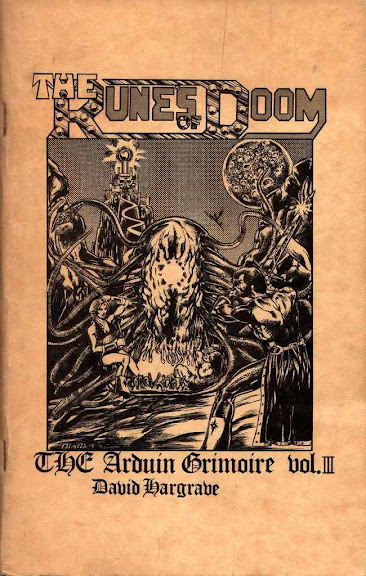 I tested this out on the game I have been running. One of my characters has a charisma of 8. I had, of course, vaguely, pictured what this meant for her in the context of the campaign, but I wanted to see Hargrave’s comments in his table. Yes, he was right on the money. But he provided me with a way to explain to the player more of what the number really meant.

Hargrave was definitely not a “frustrated novelist.” Like the best of the OSR people he manages to convey a lot with very little. His brief descriptions of the “Shadowlands” (in the eponymous supplement VII) could serve as a model of how to write great game material. It’s less than two tiny pages long – just a few paragraphs really – but I read it and thought: “This could take years and years to flesh out and play.” How many writers can provide so much inspiration in such a short space?

Many have objected to Hargrave’s mixing sci-fi elements with his fantasy. Arduin is populated with alien races, high tech artifacts, and sometimes seems to me to approximate, and even anticipate, Gene Wolfe’s renowned “Book of the New Sun” science fantasy series. The medieval purists, I believe, are ignoring the fact that Gygax himself mixed these futuristic elements into his own original games. Hargrave’s responses to criticism on this front remained steady: try it yourself before you attack it.

Arduin’s “adult” content is, as it happens, not as pervasive as I had expected. In fact, it’s almost no different from the Judges Guild stuff when it comes to referencing prostitution and tables for women’s measurements. The OSR tends to harken back to the earlier days of D&D in more than one way. Its supporters and participants tend to reject the efforts to “clean up” the game for children. Hargrave has demons, levels of Hell, and a lot of the other elements that were purged from D&D in the ’80s. But, that said, it’s hardly one long, salacious sleaze-fest. Sure, there are illegal and dangerous drugs in Arduin and Hargrave provides descriptions. But he hardly paints a happy picture for the users. It’s quick addiction and death. Arduin isn’t tame. But it’s not crass either.

Many have noted Arduin’s notoriously “colorful”, over-the-top monsters. But in this he anticipates the directions from James Raggi for the DM to always refrain from stock creatures and to, instead, make up individual monsters and species that the players have never encountered before and will, consequently, not immediately understand or know how to defeat. Instead of focusing on the viability of, say, Hargrave’s hydrogen-employing “air” sharks, people might want to consider the way he tried to make everything in his game creative and personally constructed.

All of what is offered in the Arduin supplements is, according to its author, “modular.” You should, he claimed, be quite able to take what you like and leave out what you don’t. I have, after doing some experimenting, come to realize that this is not as outlandish a claim that it might seem at first. But even what you don’t like might inspire you. I can see myself rewriting some of the tables and adapting some of his ideas to conform more with my own ideas, taste, and needs, Ultimately, Arduin prompted me to “loosen up” regarding what I would allow for and include. I don’t always think Arduin “makes sense.” But it sure looked like a hell of a lot of fun to play in. 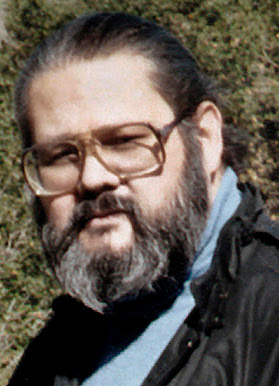 Hargrave died young, In one of his last supplements, he acknowledged his heart condition and knew that he was going to go soon. I was quite saddened to read these passages, but I admired the way he was determined to keep working on his little booklets, dedicated to getting them out to the very end. In this sense, he made me think of C.F. Russell, working away on his magical lessons right up until the last month of his life. I found out, in the course of my research on Arduin, that the late Rory Root – a well-known local comic book store owner and former acquaintance of mine – played in Hargrave’s D&D group. Someone noted that there was a story about Rory “taking out Smaug and Shelob together using a Bolo tank and bringing the whole dungeon down on top of them in the process.”

Rory died when he was only 50. Hargrave died when was only 42. The collected Arduin has a picture of Hargrave standing outdoors – and I realized he lived, like I do, in the East Bay. He didn’t reside in Oakland or Berkeley, but in a variety of the little working class towns farther out: Concord, El Sobrante. I sense that his spirit still lingers in the shadow of Mount Diablo… and I salute it. He was, in many, many ways, the true father of the OSR.