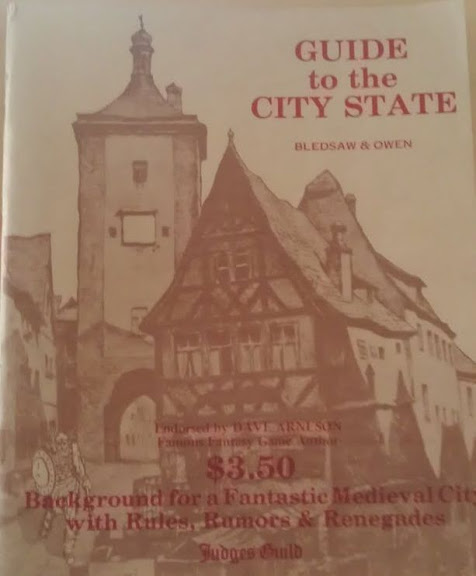 “CSIO remains to this day my single favorite piece of RPG material. As a boy it took my mind, pried it open, rummaged around placing wonderful new things inside, and then left the door open on it’s way out to let even more creativity leak its way in.”

I could not agree with this more.

The picture above is my “reading copy” of the primary CSIO booklet. Awhile ago, with the help of pure luck, I managed to score a mint copy of the first printing for very little money on Ebay. Not wanting to damage its pristine contents, I bought a slightly “banged up” copy just to have to read and reference. While other versions of this supplement are out there, the first edition always seems like the best one to me. Why?

1) References to OD&D supplements. I think the authors got more out of the basic four supplements that anyone else did. – and it shows. Scanning through this text I found many notes pointing back to Gods, Demigods, and Heroes. It’s obvious that if they found something in that text, regardless of the panetheon it was in, they grabbed it and threw it into the city. This kind of approach is one I that, I confess, I have great difficulty emulating, but it’s a big part of the crazy magic of the work itself and it also teaches you how to use the OD&D materials at hand. They also use demons from Supplement III, and monsters (a mind flayer!) from Supplement I.

2) Rumor mill. The original version has rumors at many, if not most, of the locations. The players, if they choose to hang out and make chit-chat with people at the shops and bars, can hear all kinds of stuff. These rumors can then be investigated and they form the “play hooks” that can lead to other adventures. Later editions of the game limited the rumors or grouped them together. I like the original the best.

3) The introduction – describing a confused dating system and the history of the city – is sketchy at best. Subsequent iterations and editions sought to flesh this out, but the original’s sparse – and suggestive – quality is what I think is missing from modern attempts to do this kind of thing. The entire Judges Guild campaign system really rests on mere suggestions that the GM can fill out and expand upon. This is as true for some of the descriptions here as it is for everything else in the original “Wilderlands.” Rather than provide everything you need, or give you all the answers, these kinds of tantalizing suggestions led to more creativity – rather than less. It was inspiring – and still is.

4) There are also “Legends” in addition to the aforementioned “rumors.” One of my favorites:

“A lich hidden in the Dearthwood has created an army of magically created giants known as the ‘cauldron-born.’”

The modern approach is to flesh all of this out – to provide long explanations, maps, and a whole scenario. If this isn’t possible, then such a “legend” wouldn’t be included. I am grateful that the “old school” approach of “less is more” is still available. You could ideally use this “legend” as the starting point for a “sandbox” style adventure of exploration.

5) I don’t think the descriptions of the shop keepers and other characters in the city have ever been equaled – and this despite their brevity. In just a sentence or two, the authors were able to convey a panoply of strange, funny, and terrifying figures – all going about their daily business. When taken as a whole, the CSIO has a kind of “magical Dickensian” quality to it that defies description. You get the idea that the people living there – the high and the low, the heroes and the villains, the rich and the poor, the honest and the rip-off artists – all have their own lives and are always busy pursuing their own agendas. Each has a unique personality that drives and defines their own interior sense of themselves. Anyone might try to spend paragraphs or pages seeking to replicate this kind of “psychological verisimilitude” for NPCs – and they would be bound to fail.

“This is your book for your game, feel free to alter, transpose and delete to suit your own style. Among the hundreds of establishments described herein dwell many a potential adventure.”