When I look at my childhood and the books, films, plays, and poems that informed it, I sometimes see a jigsaw puzzle. Certain parts all fit together well. Each Oz book – those by L. Frank Baum and others – is a piece that snaps into place. The Narnia, the Tolkien, the Edgar Rice Burroughs – they all go together. Here and there, however, some pieces seem to be missing. Did they fall on the floor? Did they get stuck in some other puzzle? Did the missing pieces get thrown away by accident on some rainy afternoon?

Then what happens when you find the pieces again? I never saw some of this stuff before, but that doesn’t mean it doesn’t fit. 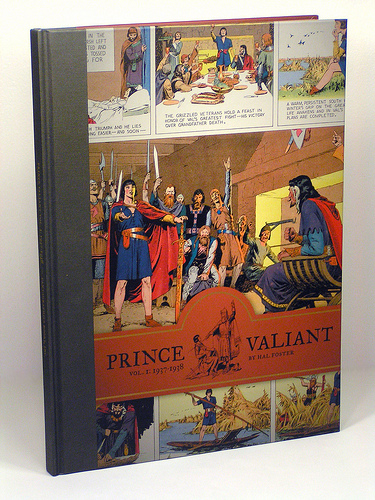 I never read Prince Valiant when I was a kid and, while I was aware of its existence, I had very little data on it. Reading the strips now, in these great new editions from Fantagraphics, it’s like stumbling on a missing piece. I put it in – sticking it where its edges meet John R. Neill’s work and Herge’s stuff. Then I step back and everything makes more sense. Check out the reflections of that great castle in the water around it.

Notice the brown, leather-like binding on the left side of the book. This gives these editions a 1930’s-1940’s feel to them. I picture myself carrying one of these books through the snowy streets of New York – a New York that only existed right before the war. Could the copy on my gloved hand be a Christmas gift for some relative? A child perhaps? My family, then, was always giving the kids gifts like these – and they were always inscribed. Wouldn’t I be wearing one of those long winter coats, the kind you see the guys wearing in Whit Stillman’s Metropolitan? 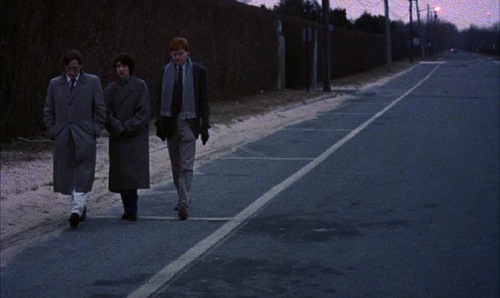 My mother and her brother, of course, grew up reading these magnificent pages in the Philadelphia Sunday papers. I feel like I may have received some faint understanding of them via a kind of unconscious cultural osmosis. In some weird way, they make me feel closer to her.

These comics are amazing in their own right. Edward, The Duke of Windsor called Prince Valiant the “greatest contribution to English literature in the past hundred years.” While your estimation may not run that high, at least take an opportunity to see where you’d place it. 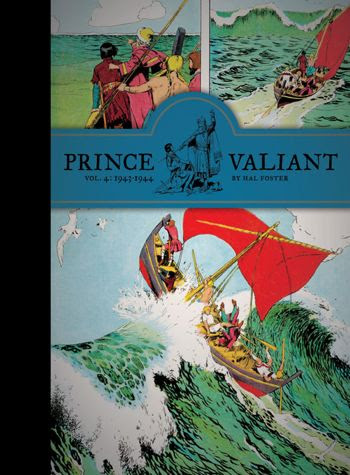 As I went through the latest two volumes that have been released it also occurred to me to note that when it comes to “old school” inspiration for D&D… Well, does it get any more “old school” than Hal Foster’s prince? I defy anyone to read these magnificent comics and not be blown away with ideas for D&D. Prince Valiant travels around all over the place – slaying monsters, encountering mythic figures… and then there’s the fighting. Lots and lots of fighting. Prince Valiant cheerfully kills anyone who messes with him. Mad famously, and effectively, once satirized this strip as “Prince Violent.” It’s really a lot like a D&D game. The OSR has also noted the “picaresque” aspect of classic D&D. Prince Valiant is completely “picaresque.” He’s forever on the go.

Foster was criticized for being careless when it came to historical accuracy. He could draw anything and obviously studied medieval architecture closely, but never felt even the slightest obligation to render his comics and stories any more historically “realistic” than he wanted to. To me, this blase attitude about “realism” is also inspirational. His expert drafting skills may make him appear Gygaxian, but the soul of the comic is very Hargravian.

I’m sure that any OSR D&D player will read Prince Valiant and come away fired with ideas and inspiration. These new editions are something no one should miss.

2 responses to “Prince Valiant and D&D”