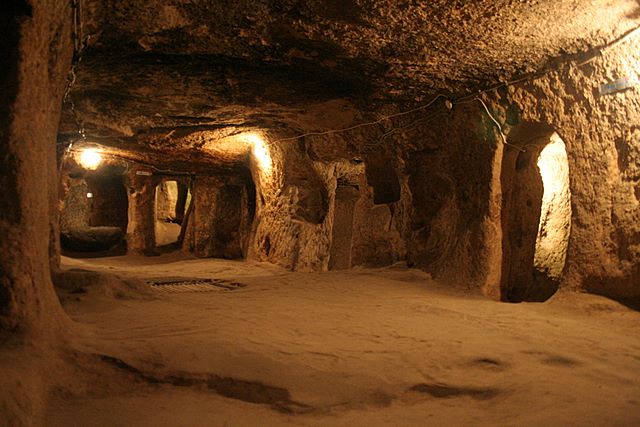 Having basements – in castles and strongholds – to keep prisoners locked up makes a kind of logical sense. There really were these things and, presumably, a ruined castle might have ruined dungeons to explore. But their layout would make a kind of sense and it would follow a logical pattern. The traps, mazes, and odd rooms common in OD&D seldom find anything like a realistic counterpart. Fun as they might be to explore in the game, the “underworld” in D&D is rarely even remotely realistic. This problem was noted by some even early on. The Chivalry & Sorcery authors, bent as they were on medieval realism, remarked that underworld adventures would occur in their game, but only if it made sense. So, no “fun house” dungeons for them! 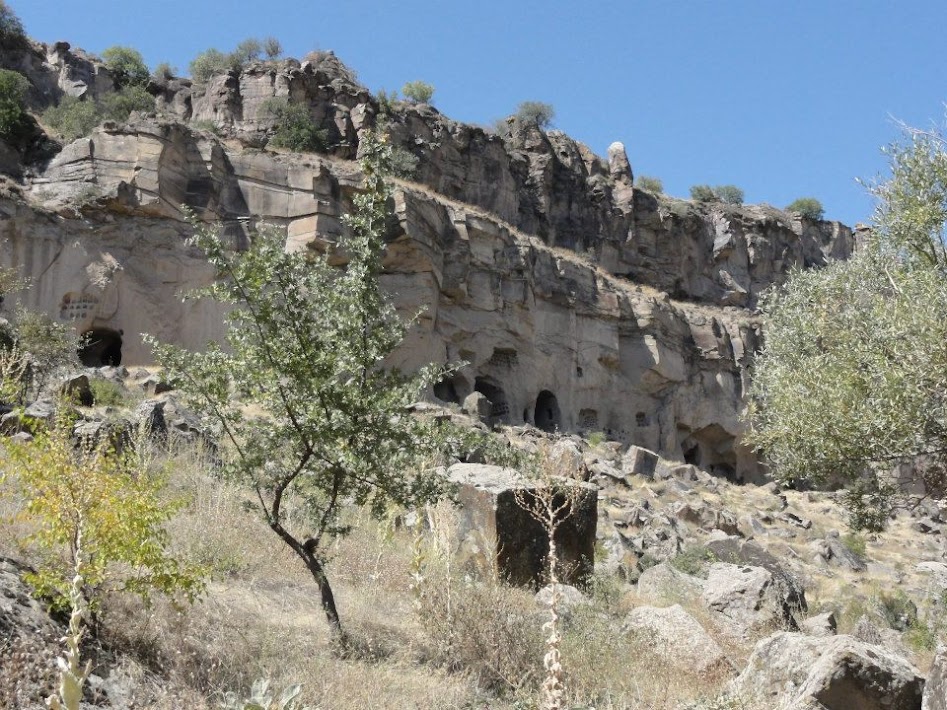 I was, therefore, surprised and delighted with the caves and underground city complexes we discovered in Cappadocia. Due to the way volcanoes spewed ash and magma everywhere, and due to the way water and erosion worked on the effluvia, fascinating and unique geological features appeared in this part of Turkey. In many places it was quite easy to carve caves in the soft stone. So, all over the area you find cave complexes both large and small. Unless you’ve been there, it’s not easy to envision the sheer number of these things you will find. Christians, fleeing Roman persecution, carved churches, nunneries, and monasteries into the cliffs and sides of mountains. Many of these religious complexes are open to the public and you can just climb or walk into them – and see the frescoes that were painted on the walls. 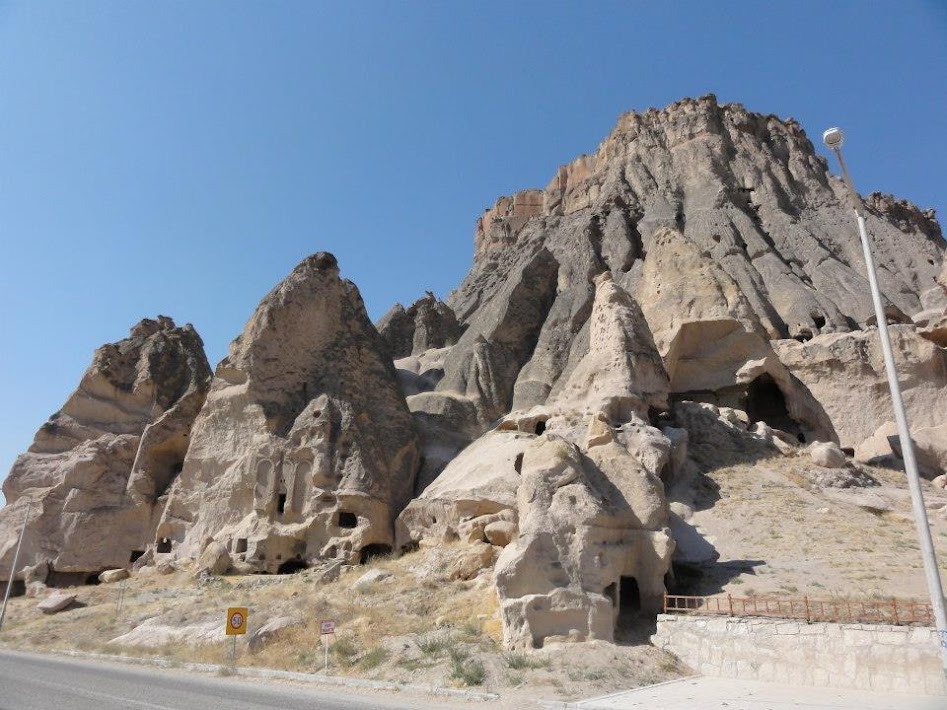 One of the best complexes we saw was the one at Selime Monastery. It was a climb to get the start of the monastery complex – and there were levels above that. Unlike what you might expect in the litigious United States, there were no guard rails on the steep and rocky trail leading up. It was a distinctly “swim at your own risk” kind of environment. 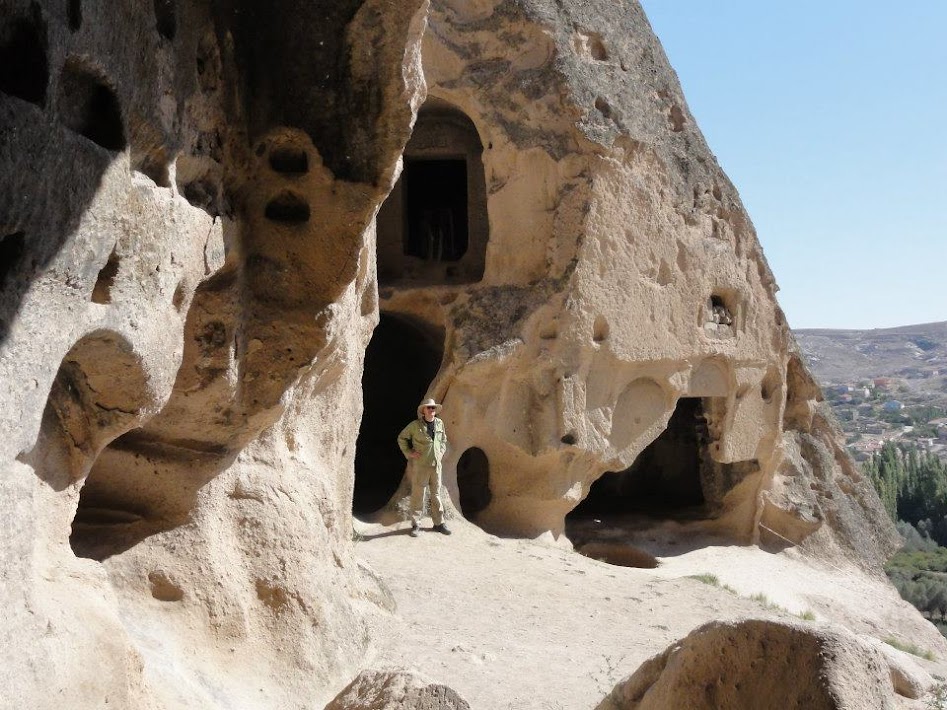 The monastery had many levels leading up to the top of a mountain. Our guide gave us a flashlight and told us about the ladder on the second level. 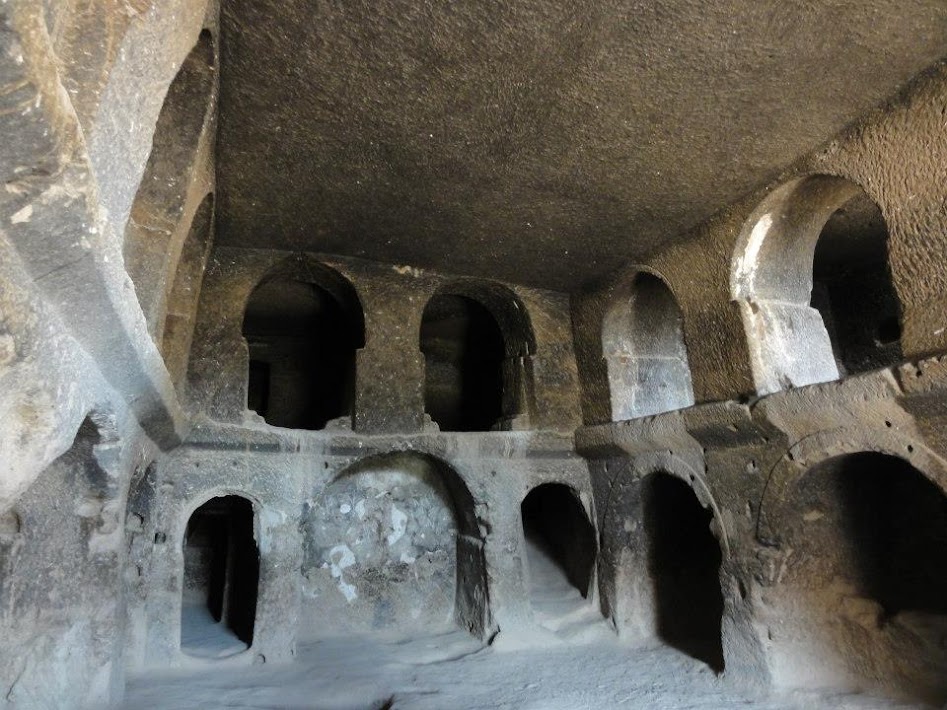 “If you climb up there to the top of the ladder,” he explained, “you will see a narrow set of stairs leading up a tunnel. Keep going and you will find other ladders – some going horizontally – and other stairs cut into the rock. It’s very small, but if you keep going you can get all the way to the top of the mountain – if you take all of them. It’s eight levels up.”

“When you get back down,” he added helpfully, “I’ll be waiting by the van.”

He told us he had made the entire trip himself three times – accompanied by other adventurous guides.

“Underworld rules are very flexible, and can be applied almost anywhere. Officially, the Underworld is made up of the various levels below ground level that are, found in various circumstances, such as in Manors or Castles, or in caves. But realistically they can apply to any adventure or segment of adventure that does not occur out in the open, such as the upper levels of a tower or manor.”

I dutifully climbed up the ladder we found on the second level and saw that it was total darkness from that point up. I turned on the flashlight and looked at the steps. In the feeble light, which only shown a few feet ahead of me, I could make out a steep tunnel with steps cut into it leading up. It was so narrow and steep that – maybe – an agile nine year old boy could have handled it. I decided to pass on the climb to the peak. When I came to the top of that ladder and pushed my head into that total darkness, I realized that this was as close to being in a real “D&D” type environment as I was ever likely to find.

On another tour, we went to one of Cappadocia’s underground city complexes: Derinkuyu. This city went down eight levels under the earth – which we could access. As we journeyed to this site in the van, our guide asked us if anyone in the group had high blood pressure or a heart condition – since visiting the city might be dangerous for people with these problems. I didn’t have a problem with either.

“Is anyone here claustrophobic?” he asked.

Well, I’m not in most cases, but I admit that I started to worry. How could I cope with being eight levels down in a cave city like this? I considered that plenty of other people had done it. But I’m over six feet tall and I started to wonder whether I might get stuck down there. That would not be pleasant. On the other hand, the D&D aspects made it too good to pass up. 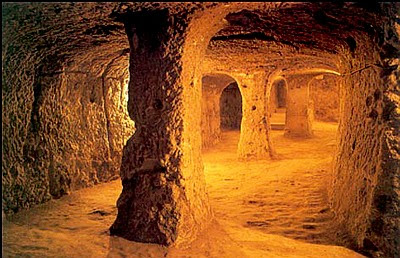 We descended into the first levels – which were shockingly well ventilated and large. As we got lower and lower I thought about all the different levels in a dungeon. The passages were narrower than I would have expected. Clearly, one could not swing a long sword in these spaces. Maybe you could hold it out in front of you and try to ram an opponent with it – like a bayonet. There was no way to do anything but walk single file – and not all of the city was, of course, open. Passages led to another underground city nearby, which could be used for escape if the levels above had been breached by invaders. 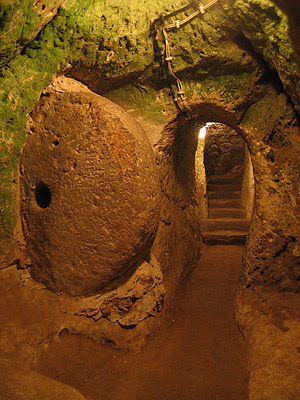 A circular stone was used to block passages and lock out invading forces. Slits were cut in it to allow for swords to be employed through the slits. How D&D is that?

Finally, on level eight, I began to feel a little claustrophobic. Our guide pointed to yet another narrow tunnel with steps leading down.

I decided, along with my companions, to go for it. The tunnel had to be cleared, because no one could go down if people were coming up. I leaned over as far as I could, my back brushing across the top of the tunnel, and speedily made my descent to the bottom. The room did have a grave at the far end. 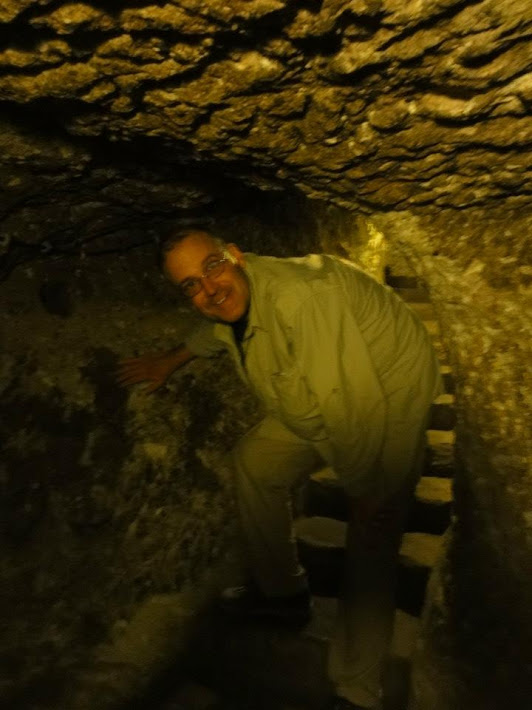 You can see me emerging into the room in this picture – and just how long and narrow the tunnel was. This was not easy, but I’m glad I did it. Many of the people in our party took a pass.

This entire complex was, historians estimate, large enough to house 20,000 people, plus food stores for them and their animals. On our way back to the surface, we saw the stables where the animals were kept.

No one thinks people lived in the cities year round, but that they probably used them in the winter – when it was cold and in the summer when it was hot – or people fled to them when they were under attack by outsiders.

People, as I have noted before, must need food to survive in a dungeon. Throughout the trip, whenever we saw the kinds of cave dwelling, I’d ask where the crops was being produced. In some instances, people could farm land right outside the caves. In other cases, they would have to commute longer distances. People in the area still farm land right near many of these complexes. We saw farmers with wheelbarrows and crops all over the place. Our guide told us there were eleven underground city complexes like this that have been found so far in the area.

All in all, there are few more “OD&D” places in real life than in Cappadocia. The OD&D campaign ideas – “Why did people leave the caves?” “Why is this cave monastery cursed?” “Where is the lost underground city?” – just kept coming.

One response to “The Underground City?”