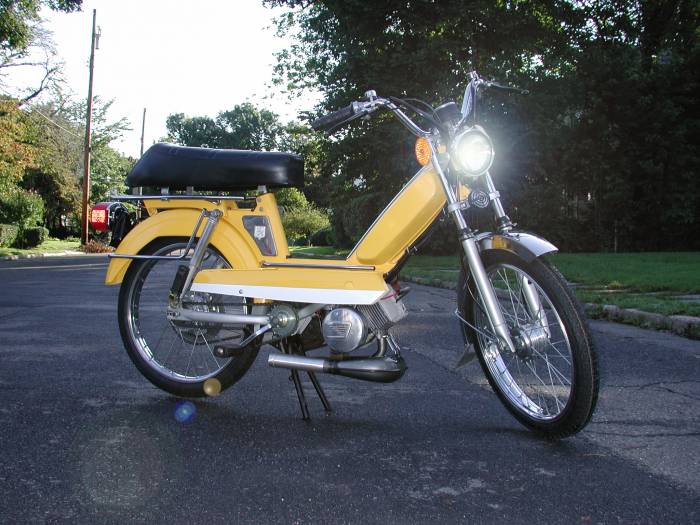 Back when I was in college, and my brother was still in High School and living at home, a neighbor a few blocks away made an arrangement with him and a friend to do some yard work. In exchange for raking the leaves, mowing the lawn, and tackling some other routine chores, this neighbor agreed to give them a yellow Peugot moped.

Mr. Oldenberg was elderly and lived in a house that had been built in a vaguely socialistic manner shortly after WWII. His property abutted a substantial wooded area owned by Orange & Rockland – our local utility company – and I’m sure he was vexed with falling branches and a lot of leaves on his lawn and in his backyard. How and why he got the moped I am not sure. Did it once belong to one of his own children? I have a hard time believing he bought it for himself. But it was sitting in his garage, in perfect running condition, and he wanted to get rid of it. Giving it to my brother and his buddy in exchange for their labor seemed like a great idea.

The devil with these things is often in the details. Rather than waiting until after the boys had finished the agreed upon work, Mr. Oldenberg decided, perhaps out of a desire to clear needed space, to give the boys the moped before they had performed their labors. Of course, once my brother and his friend got the moped, going over to Mr. Oldenberg’s to rake leaves seemed less imperative. New things appeared on their horizons, different opportunities to spend time after school beckoned, and the yard work they had agreed to do was forgotten.

I loved the moped. Many people evidence nothing but contempt for these things – mopeds being neither real bicycles, nor actual motorcycles – but I think they are wonderful. I’d like to have one now. I borrowed the yellow moped when I was home from college and rode it around all over the neighborhood. There are some pictures of me that exist in a family album posing on it while my girlfriend at the time, Cynthia Park, stands next to me. I can honestly say that some of the happiest times in my life were spent riding that yellow moped down damp suburban streets, humming Bob Marley songs:

“Well, I feel so high, I even touch the sky
Above the fallin’ rain!
I feel so good in my neighbourhood, so:
Here I come again!”

Naturally, Mr. Oldenberg started to get angry at the boys for their dereliction of duty. He kept calling the house and then started to appeal to my parents directly. Unlike other people we knew in the neighborhood, Mr. Oldenberg was able to make my parents felt especially guilty – as he happened to be a Holocaust survivor. He had been in the camps and even had a tattoo on his arm to prove it. I recall seeing this tattoo while he lounged shirtless at the neighborhood swim club. My parents, conscientious as they both were, would have dreaded any complaints about their son bailing on work he had agreed to do – but Mr. Oldenberg’s status as a “survivor” made his aggrieved harangues particularly vexing.

My brother, however, insisted that it had all been a big misunderstanding. He and his buddy had done the work they were supposed to have done. Mr. Oldenberg was simply mistaken. Did the truth lie somewhere in the middle? Did my brother, once the moped was his, really flake on the raking? Or was Mr. Oldenberg simply assuming that he was entitled to more work from them than he had originally agreed to? This controversy, I am sorry to say, remains a mystery to this day.

The moped disappeared. When I came home from college and asked where it was, I was told – with sighs and pained expressions – that the matter had been resolved. Mr. Oldenberg wasn’t phoning the house and no one seemed too happy or satisfied with the result. But it was obvious that my brother, Mr. Oldenberg, and my parents had worked out some kind of deal that my family was keeping silent about. Once I went off to college, I discovered, I was out of the loop and was no longer privy to the details of these family matters – especially when they involved my brother and any trouble he had gotten into.

I am sure that I missed that moped more than anyone else. My bother may have associated it with guilt feelings and seen its presence as a silent reproach. My parents must have associated it with cringe-inducing phone calls complaining about their son – calls that came, after all, from a Holocaust survivor. I only associated the moped with driving around by myself feeling great.

I was reminded of this story when I noted criticism of some Kickstarter and Indiegogo projects. Too often, it seems, crowd funding works the way the deal on the yellow moped does – people get paid for products before the products appear. In this case, many of us start to feel like Mr. Oldenberg staring out at his leaf-covered backyard and wondering where the boys have gotten and when they are going to come over and earn that moped he gave them. We gave the money for the projects, and what has happened? The problem is the same – once they have the money, the inventors, writers, or artists who have taken it may start to feel a lack of a need to follow through. They, like my brother and his friend, may find other things to do or they become distracted by other avenues. After all, they have the money. Once the cash is in hand, or once they have spent it, the impetus to complete the project as promised may evaporate.

Some of the most respected people in the OSR community are beset with these problems right now. Work on Dimmermount, a megadungeon promised by James Maliszewski, is seriously overdue. At the same time, as critics note, James keeps right on writing on his blog each day. If he can do that, they ask quite reasonably, why can’t he work on the project he took all that money to do? Maliszewski refuses to ever directly engage any of his critics. It’s obvious to me that he keeps right on seeing himself as the “grand old man” of the OSR – its most eminent taste-maker and gatekeeper. He has the yellow moped. Where’s the yard work? Alas, I am told that James is not the only one with this problem. Other Kickstarter projects – by other illustrious OSR members – are likely to be in similar straits.

These kinds of community crowd funding projects can be wonderful – when they work. But what if they don’t? The folks who contribute, gamely expecting what’s promised, will get burned. What will the repercussions be? One friend told me he joins so many of these that he’s actually surprised when he gets one of the products. I’m not that generous. If I gave these people money then I want what they were promising.