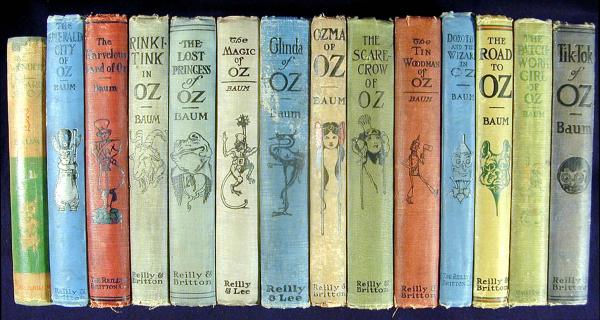 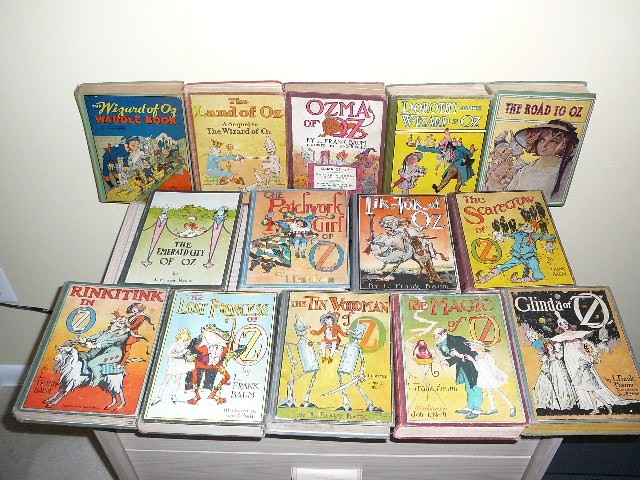 When I was growing up in New York our next door neighbors, the Bellavers, were a “theatrical family.” Harry had been in many movies and TV shows. His wife Duddy, a stage actress, has retired from treading the boards many years before him. She was a nut on Baum’s Oz books and a collection of early editions that she treasured. My mother read them all to me as a child and, later, I started collecting my own copies of Baum’s works – including his many other novels that were unconnected to Oz. I joined the “International Wizard of Oz Club” and networked with the other members to find copies of the books I was missing.

Duddy was strictly a “Baum purist.” She detested the Oz books written by Ruth Plumly Thompson and others after Baum has died. My mother was more broad minded and had enjoyed, when she was a girl, some of RPT’s efforts. I went even farther afield and tracked down the books written by John R. Neil (Baum’s principle illustrator), Jack Snow (who also wrote for Weird Tales and died tragically), and Eloise Jarvis McGraw. By the time I graduated from high School I had a huge Oz library – which was greatly assisted by a gift from my otherwise aggravating great aunt Meta. She gave me her entire collection. My High School friends did not understand my obsession and, at times, ridiculed it. I ignored them. The Oz/Baum books were too self-evidently wonderful for me to pay to much attention to any of their detractors.

Many years ago I had to write a short autobiography. I suspect that some of my readers were set to perform the same task under the same set of circumstances. Some of the feedback I received surprised me.

“Don’t make value judgments based on these events,” I was told. “What you see as advantages now might be shown to have been disadvantages later.”

Over twenty years has passed since then and I still believe that the fact that my mom read me all these books, and by doing so helped to instil a love of books and of this kind of fantasy in me, was an advantage. What do the Jesuits say about getting to people when they are young enough? As I read through the grim statistics in Mark Bauerlein’s book (The Dumbest Generation: How the Digital Age Stupefies Young Americans and Jeopardizes Our Future (Or, Don’t Trust Anyone Under 30)), I am more convinced than ever. People who don’t grow up in literate environments have an almost impossible struggle to overcome the problems they face – in a lack of vocabulary, in an inability to concentrate, in even seeing books as fundamentally important at all. If we look at the Thelemic and occult communities and we see people “not getting the books” – being unable to read them, understand them, see them as important – could it be because fewer and fewer people are being raised in homes that prize literacy? Dumping kids in front of the TV will mean, in the long run, that those kids will never be able to any great writer and thinker. Even in the D&D scene we can detect the differences between the people who “came up” with books (e.g., the OSR crowd) and the people who relate to role playing mainly through the influences of films or video games (e.g., everyone else).

A Zen koan asks: “What did your face look like before you were born?” In the same sense, I often wonder what houses looked like, and felt like, before we inhabited them. What did my family home in New York look like before we moved there, before I was born? My neighbor Duddy, with her collection of Baum books? She knew. She had, after all, lived there a long time. But for me, the shape of the homes on the street, and the lives of the people living in them, are almost as difficult for me to envision as my own face before I was born. People, we understand, can gain enlightenment through struggling with these kinds of Zen koans.

The Oz books must seem archaic and obscure to kids now and I get that. The Baum books that had fallen off the map, the books he wrote under other names, for younger kids, the books that didn’t sell well and dropped off the radar, they seemed strange and archaic to me. But that was part of their distinct charm. If people don’t grasp the appeal of the strange, the unfamiliar, the archaic and the forgotten, if people haven’t felt the peculiar and beguiling thrills of the “nostalgia of the unknown” – then what hope is there for them?

5 responses to “The Nome King’s Armies”