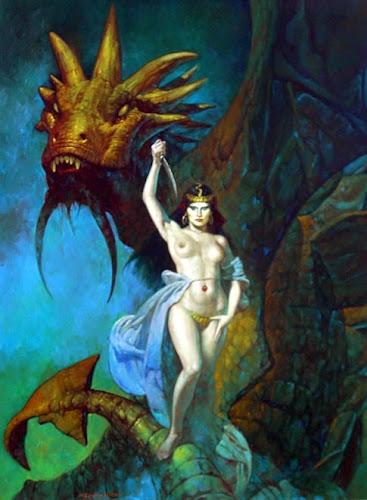 “Great Wurm Road – This place is a series of interlocking and interconnecting caverns that span the entire world.”

“As deep as seven miles or more and never less than 1,000 feet beneath the surface, these dark passages run the gamut in size from mere inches to miles in width and height.  Due to this similarity, determining where the more mundane holes in the ground and caverns begin and the Great Wurm Road starts can be tricky.  However, all parts of the Great Wurm Road have certain things in common.  They are imbued or pervaded with intense evil of the ‘elder’ or ‘old dark’ kind.  The alien influence of these dark and sinister beings work strange machinations and designs beyond comprehension and defy description.  All are abodes of some of the world’s most terrible monsters, and the ‘Great Elder Wurms of the Eldest Dark’ live and travel through them constantly. Most of these areas are known or suspected spawning areas for everything from Bonewurms to Orcs!  Thus, they continually replenish their terrible denizen’s populations.  More than just a string of weird subterranean locations, dungeons and deadly monsters, the darkly glittering lights of civilization exist, many surrounding bloody altars and forgotten fanes that have their residence within these dark precincts.  Priests and magicians who follow the ancient evils (or who have ‘patron’ demons) make their abodes down in the deep darkness of the ‘underground world’.  Fortunately, most of the caverns have thick physical barriers, not readily accessible for ‘above’ nor is above ground readily accessible from below.  Even so, from time to time, these dark caverns wield unholy influence (either directly or indirectly) upon the upper world.  Thus, equally so, time to time heroes of various stripes venture downward in the hopes of stemming, even minutely, the times of evil which well out of those noisome depths.  Some of the old legends even whisper that a few of the ancient Kthoi, long thought to be extinct, still linger on in the deepest bowls of the Great Wurm Road. Finally, there is strong evidence to indicate these caverns are actually becoming larger and more extensive for some unknown reason. ”

This is the kind of “hook” for a “megadungeon” I think some have been looking for, but it was the kind of thing Hargrave made look effortless.

One response to “The Road…”