“Strange is the night where black stars rise,
And strange moons circle through the skies,
But stranger still is

While many people have forgotten it now, Dungeons & Dragons once stirred up its own brand of parental anxiety and attendant media controversy. Back in the early 1980s, when the game first broke out of its rather small original niche and into the wider culture, many people found cause to worry about it. Christians believed that it encouraged occultism. Some parents, watching their kids spending hours and hours playing it and being preoccupied/consumed with it (I remember experiencing this kind of original fugue state the game could inspire), became concerned that the game could cause psychological damage to their children. 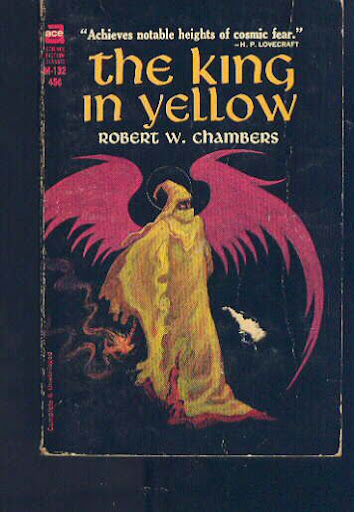 One mother, whose son was an avid D&D player and who committed suicide, started a group named “B.A.D.D.” (Bothered About Dungeons and Dragons) to crusade against the game. Nervous schools banned playing it. The people at Chick came up with a comic book tract denouncing the game. What was an unknown, and seemingly harmless hobby for geeky kids, suddenly became tinged with an aura of menace.

The first edition of D&D didn’t exactly help alleviate these concerns. The original game designers were adult men who had started playing war games with other men. So the basic rules and supplements to D&D were not exactly written with children in mind. Eldritch Wizardry – the third supplement to the original rules – featured a cover depicting a nude woman on an altar. 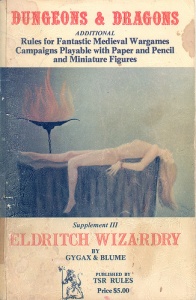 The same supplement lovingly described hierarchies of demons and gave descriptions of their palaces and the minions serving them in Hell. Bordellos and prostitutes, of various classes and types, were described in other game materials from this period.

My friends and I were fascinated by these demonic creatures. One in particular, the vicious Demogorgon, tended to hold our attention: 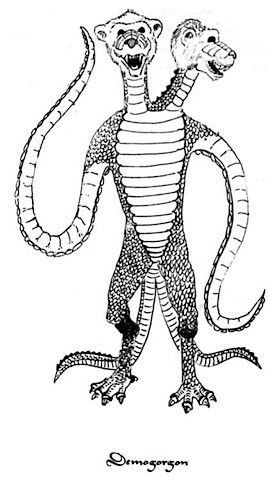 Merely saying his name aloud summoned him automatically. The guy who taught me to play D&D, Scott K., insisted on this rule and so we learned never to let a player utter this creature’s name. I can, to this day, still feel a vestigial shudder.

Responding to parental fears and pressure, and not wanting to see their market share drop, TSR (the company that made D&D) left the demons and the hookers out of many subsequent editions of the game and – even when the demon kings were included again – they de-emphasized their role and nature.

Naturally, this craven capitulation angered many of the “Old School” advocates who, naturally, rushed to stick the demons back in the game. Orcus, Demogorgon, and other demonic lords all re-appear in the OSR “clone” versions of the rules – and in all of their original nefarious splendor.

But beyond that, many of the OSR people seem determined to push the boundaries and recover more ground lost to worries about children and their impressionable young minds. Some of the OSR clone games feature the kind of outrageously violent artwork that would send any middle class mom into a panic. Some people like this approach, and even relish it. Others are turned off and disparage the gruesome drawings – they fear a return to the “bad old days” when D&D suffered from societal disapproval. 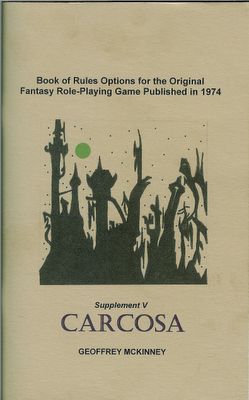 So far, though, the crowning piece of OSR transgression is the notorious “Carcosa” supplement by Geoffrey McKinney. “Carcosa” is a fictional city invented by Ambrose Bierce. But it was famously elaborated on by Robert W. Chambers in his horror novel The King In Yellow. In this novel, anyone reading a surreptitiously published (and legally banned) play about this otherworldly city goes insane. 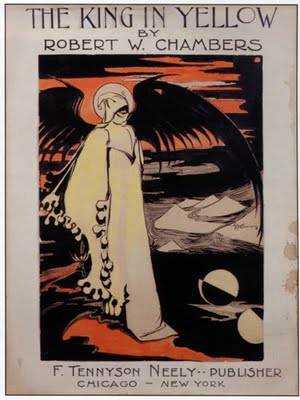 It’s easy to see how this idea influenced HPL’s creation of the Necronomicon. This OSR supplement is intended to be the basis of an entire “campaign” set on the planet the play takes place in. Each ten mile hexagram of space on the map has something in it, and those “things” are given brief descriptions for the players to encounter. There is also a long list of fiendish spells and rituals, the details of many of which are extremely disturbing.

The “Carcosa” D&D supplement is currently out of print. Some defend the work purely on the grounds of “free speech” and others condemn it outright. Many of the OSR people have lavished praise on it. It has an expurgated version that floats around too. Up until last week, the censored version was the only one I had seen.

I admire the way that many of the OSR people seem ready, again, to push the boundaries. The 1970s were the era that D&D began in and it was, in many ways, a less restrictive and repressive time and climate. The OSR people seem to me to want to return to the sense of freedom and opportunity that period represents for them. In the process, they reveal how much has changed… and what we have lost.