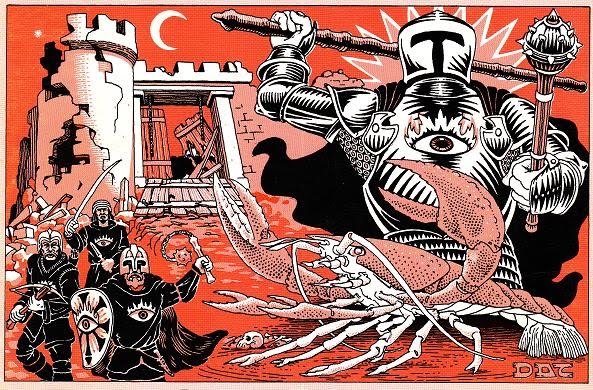 One of the hardest things people coming to the OSR, or old school, pre-1980 role playing games face is the issue of the “cleric.” These religious figures – who could utilize full armor, some weapons, and their own lists of spells and magic as “spiritual warriors”, confuse and annoy many gamers. The “cleric”, as a player class, bothered people even at D&D’s own start. The game’s unfairly neglected co-creator, David Arneson, did not use them at all in his earliest version.

I, however, feel that clerics have been unfairly maligned and that they can be, and indeed are, essential to OD&D and “old school gaming” in general.

The original rationale for including the cleric, some have maintained, is to have characters who can “heal wounds.” A party entering into combat needs someone around who can magically patch them up. Thus, the clerics have a “cure light wounds” spell – which they typically take on at the start of the game. Chainmail, the miniatures game which which D&D grew out of, had clerics who could “bless” troops and help their morale when going into battle. This feature is also in OD&D. Additionally, clerics can “turn” the undead and otherwise do special, “holy” battle with zombies, vampires, lycanthropes, etc.

Part of the problem that clerics present involves their basic religious orientation. Are they Christian? Early versions of the game have the clerics employing crosses. Later versions altered this to “holy symbol.” The earliest details about what the “clerics” in the game were supposed to worship and believe in were glossed over. Too many people thought that this meant that the game had to feature some kind of primitive, medieval version of Roman Catholicism. To have clerics, one had to have an established church, with rites, a theology, etc. This onerous set of obligations interfered with, say, a more Tolkien-esque kind of fantasy world, free of Jesus and his legacy. That Tolkien was himself a devoted Christian is itself a tad ironic in this context. Questions regarding the role of monotheism came up, and as the game “advanced” and became more complex, it embraced the idea of varying pantheons taken from real and fictional sources with clerics, good, evil, chaotic, lawful, and neutral, serving these various deities and entities.

One of the things I have noticed, as I have experienced the occult community is that, no matter what people say, they always seem to desire clerics – and reject magic users. After awhile, any magical practice looks dangerous and there is always an unconscious urge to ameliorate it by turning what started as magical into something religious. This is a anthropological phenomena that has received no small amount of study over the years. The magic user is an independent operator, not tied to the community and is often selfishly at odds with it. The cleric, on the other hand, is dedicated to his or her community and acts as its caring and, ideally, selfless shepherd. Even people who start out thinking they are invested in magick almost always “convert” to the cleric choice. Magical groups recast themselves as “religious” organizations over time. The magician is really about the individual. The cleric is about the community. The magician works to become god. The cleric worships god. The differences that exist between these two paths can be studied at great length. No matter how principled a magic user may be, there is, at their core, an element of amorality – even of simple proneness, or openness, to objectivity. This very quality is what led mankind from magic to empirical science. It has always aroused the suspicion, if not the ire, of the religiously oriented.

One of the best ways to start to think about the cleric, in an OD&D context, is to think about the role of shamans in tribes and other primitive groups. These figures may have some magical powers, but they are not individualistic magic users. Instead, their duty is to lead and help their community. People today are no different. They still seek out religious figures to “counsel” and “heal” them. When you start to see this psychological reflex operating around you, clerics in OD&D become all that much easier to understand. Rather than being a rather artificial compromise between fighters and magic users, they suddenly assume an essential, central, and obvious role. Don’t worry about the larger church structure that they have to fit into. That can come later. Instead, think about the way people will seek them out – just as people are still doing now.

One of my players wondered about the social class of clerics. They had to be able to read, he suggested – they had to be able to fulfill the duties of the clergy in a typical medieval environment. I countered by suggesting that these concerns bypassed the way most people emotionally relate to the gods and to supernatural forces. They seek out protectors and those who they know think it’s their job to protect them. This basic religious sentiment and need exists regardless of whether the people in question are literate or illiterate, advanced or primitive. It’s a constant in human life, it’s part of human nature, and leaving it out of the game is absurd. I’d even argue that the presence of magic, monsters, and the kind of violent conditions in most OD&D campaigns would actually ratchet up the need for clerics. As things looked more dangerous and unstable, the clerics would be more in demand, and possibly more powerful, than ever. Just as there are few atheists in foxholes, there are probably very few in campaigns dominated by all kinds of insidious and constant threats, causal murders, and heavily populated by horrific, malignant creatures of unknown origin and powers.

3 responses to “Clerics Vs. Magic Users”