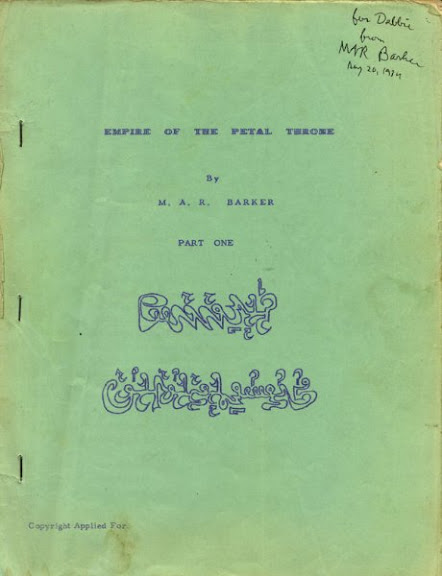 I just found out that noted linguist and FRP innovator M.A.R. Barker died. I have never played in his famous “World of Tékumel,” nor am I as steeped in his work and ideas as I might want to be, but I will readily admit to his great influence and importance and, so, mourn his passing and pay homage to his life. 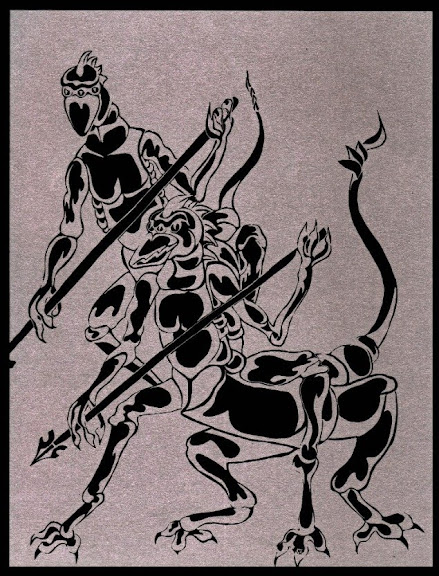 Anyone playing FRP games in the ’70s was aware of Tékumel. Its boxed sets, miniatures, and advertisements were ubiquitous. They always represented a high water mark in terms of what an utterly original, complex personal campaign could be like. Expanding on my earlier comments, Dr. Barker was an accomplished academic who brought the full weight of his experiences and erudition to the game. He was, in other words, no naive Junior High kid. That said, his detailed, mythical world began its gestation in his imagination very early in his life. 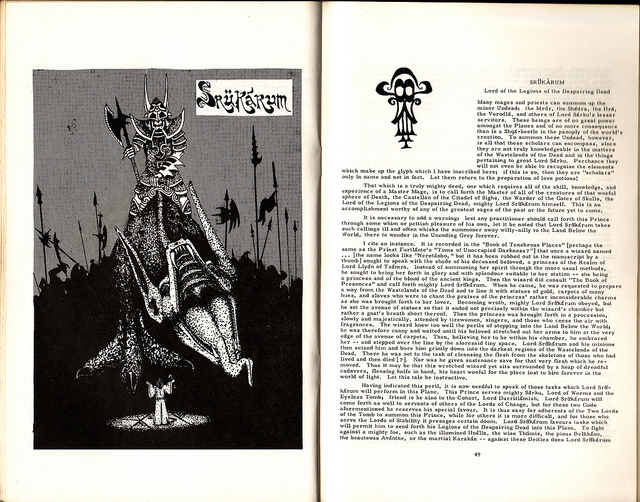 There are three particular pieces by Dr. Barker that I have derived quite a great deal from. The first is his The Book of Ebon Bindings. This is an illustrated grimoire for some of the sorcerers on his planet. It remains a fascinatingly well-realized and detailed exposition in its own right and can be read profitably by people who know nothing of Tékumel. Indeed, I would not hesitate to recommend this book, as it is and without any other explanations, to occultists. Without a doubt, it’s better than most actual magical texts. While the text itself is noteworthy, the illustrations of the various seals exceed the work of Barker’s contemporaries in the occult realm. This book profoundly influenced Geoffrey MacKinney’s work in Carcosa – as he has acknowledged in interviews. It can make the same impact on anyone else.

Second, I have marveled at Barker’s article on the art of scyring – found in The Grammar of Sunuz. Having done some work in this field myself, I can think of no other contemporary occult book on this subject that is as lucid – and believe me, I would know if there was one. Barker combines an intuitive understanding of advanced magical practice with an old fashioned academic’s no nonsense, cogent presentation of complex and challenging material. The mastery of astral vision is one of the most difficult of all magical subjects to explain clearly. Many have tried – and just as many have failed. Barker, on the other hand, succeeded admirably.

Lastly, I greatly appreciated Barker’s essay “Create a Religion In Your Spare Time for Fun and Profit.” Again, the author revealed an unusual amount of insight into human motivations and psychology that, sadly, many simply lack. This book provides ways to think – realistically – about the role of religion in an imagined world that you will never get anywhere else. As in these other texts, you can easily apply the lessons learned here… elsewhere.

Make no mistake, Barker’s work was often intimidating. Advanced and complex scripts, puzzling aliens, and detailed languages all figure in his works. Sometimes it looked to me like a cross between the Mayans and some Balinese empire, infused with bizarre psychedelics. But it was a unique vision and a consistent one. Anyone reading his work knows that Barker knew what he was doing and describing. Beyond a gaming achievement, I think the work that sprung from Barker’s eccentric genius represents something significant about the human mind itself. No one should deprive themselves of being inspired, even awed, by what he did.

And when you hear a creaking sound, sniff the air for that telling hint of cinnamon…