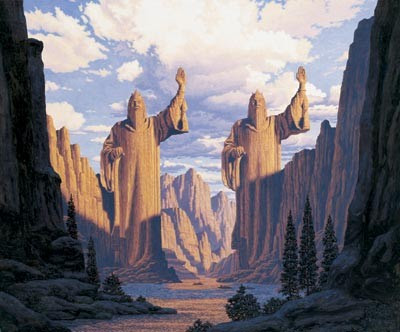 Back when I was playing D&D as a kid, a friend who I had introduced to the game – and who went on to keep playing it far, far longer than i did – asked me a simple question:

When I sought to come up with a description that I thought with suffice, he asked me to draw a picture. Seeking to build off the work of the Brothers Hildebrandt (whose artwork from the Tolkien books I had all up over my bedroom), I did my level best.

His father, a brilliant but deranged individual, wandered over and gently critiqued my efforts.

“The snout is too long,” he declared. “The could only eat fish with those jaws.”

We worked on it for some time and I can’t remember, too well, the finished product. Needless to say no one was particularity satisfied with the result.

I thought about this discussion, again, when I came across this 1989 illustration: 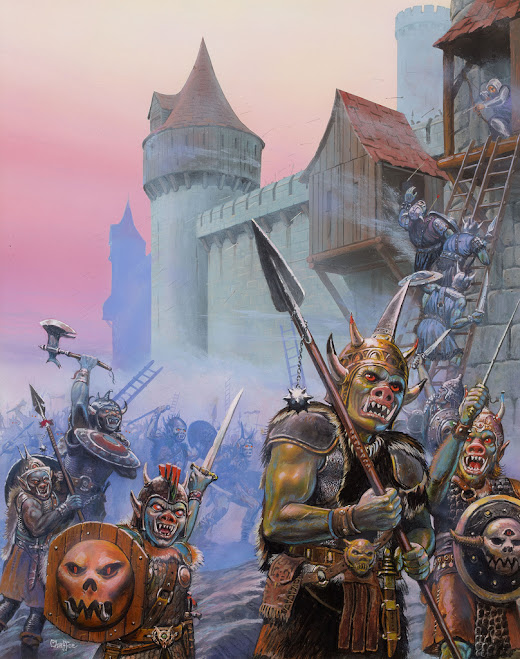 While I don’t have any time for nearly all of the post 1979 D&D art, I nonetheless have to concede that these are, for me, what orcs look like. If you run into any of them in my campaign, that’s what you are going to see. That. Just that. Those guys. Sure, it’s a lurid picture and far from great art. But for all of those issues (and more), in some weird way… it still gets the job done.

I often wonder how close other DMs and players can get to having a picture of the characters and the terrain features of the games they play in their mind. Does it come in crystal clear? Do they have flashed when they can “see” what they hear described and what they do? How well do classic illustrations or even not so classic illustrations help or hinder?

As I build a wilderness campaign hex by hex (pretty much) on the Outdoor Survival map – using the random encounters, the percentage of creatures found in lairs, and the rules for towns, castles, citadels, etc. – I enjoy finding the varying elements of campaign coming to life in this manner. I want to “see” more of it: the fords in the river, the mountains and the woods, the swamps and the deserts.

When we go back to the canon of “pre-game” novels for inspiration (“Appendix N”) we can also go back to lost illustrators and artists who, of course, had never intended their work to be used for games or players at all. This vital visual element – that which determines how well we can really “see” what goes on in the game – cannot be over emphasized.