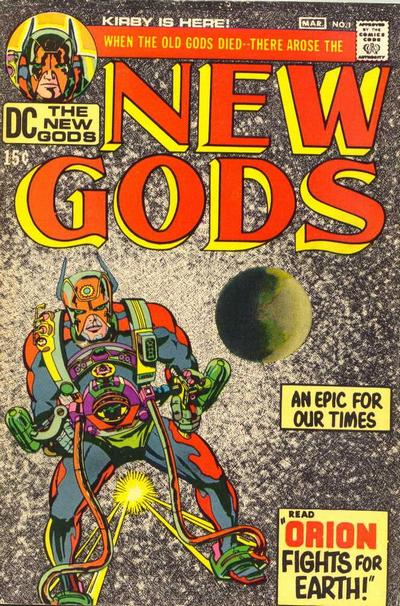 “Beneath the broad tide of human history there flow the stealthy undercurrents of the secret societies, which frequently determine in the depths the changes that take place upon the surface.”

“Philosophers, both when they are right and when they are wrong, are more powerful than is commonly understood. Indeed, the world is ruled by little else. Practical men, who believe themselves to be quite exempt from any intellectual influences, are usually the slaves of some defunct . . . academic scribbler of a few years back.”

“Too late. The war is over. Alone in the sink of the Fourth World. Among the bones and shells of dead gods. Alone in the dark. I am the hole that remains when everything else is gone. The emptiness shaped like God.”

“Gods and New Gods… are self-aware ideas. They use concept-weapons, anti-life equations, and hunter-killer metaphors.”

The “Fourth World” that Morrison refers to here is a fascinating and stubbornly enduring part of the history of DC comics. Jack Kirby, famous for so much creative work in comics stretching back to the 1940s, and responsible for most of Marvel’s astonishing and revolutionary revival in the early 1960s, got tired of his partner Stan Lee and, in the very early ’70s, departed for Marvel’s rival DC. There, he began imagining “life after Ragnarok” – and the creation of a set of beings he termed the “New Gods.” Since Kirby had memorably worked on the “Thor” character at Marvel, the destruction that prefigured the rise of the “New Gods” could easily be read as his own symbolic distancing of himself from his labors at his old company. The new entities he created lived on two different worlds – one good and the other dominated by evil (“New Genesis” and “Apokolips” respectively). Kirby envisioned an entire cosmology based on these creations that, once established, would then proceed to interact with the rest of the regular DC characters.

The “Fourth World” creations, which included both the “New Gods” and the “Forever People” (the latter’s exuberant, hippie-like offspring), were bright, glimmering exemplars of that strange and shining period that marked the time between the Apollo landing and the start of the energy crisis, Watergate, and inflation in 1973-74. Many might view these characters as evidence of the way that conservative comic book companies (and DC was much more conservative than Marvel) came late to the counterculture. But I tend to see these heroes and demons as representing a unique, post-60s period all their own. They celebrated an embrace of technology and its possibilities that was only possible after NASA’s successes and before the onset of gas lines. Many find these stories to rank among Kirby’s most imaginative efforts.

The experiment was doomed. DC’s chief editor, Carmine Infantino, pulled the plug on the project pretty quickly and Kirby moved on to other work. The mythos had died before it was yet really born. But this did not mean that it was forgotten. Darkseid, chief “bad guy” of the “New Gods” continued to reappear as a “cosmic villain” in DC comics when one was needed and even influenced the creation of a similar character (“Thanos”) back at Marvel. Many insist he was the inspiration for Darth Vader. Periodically, other writers and artists would pick up the “New Gods” and other “Fourth World” characters and try to reinvigorate them – but none of these efforts were very successful. The period of the “New Gods” – a moment in time and in the larger culture which had informed their peculiar vibrancy and potentiality – had passed. Recently, efforts were made to kill off all of the “Fourth World” characters once and for all. But I strongly suspect that they will re-appear sooner or later. Over and over again, it’s been shown that DC cannot leave them alone.

Grant Morrison’s recent work recasts these entities as “self-aware ideas” (see quotations above). I considered this approach along with the particular zeitgeist these creations emerged out of. Could a god be a “self-aware” idea from the early ’70s? Could some deity, so limited, even be possible? Or was the fullness of the “self-aware” idea only possible for us to truly observe during that limited space of time? If LRH is right, and if we fell through the various spheres – a descent that began with ethics and which ended in the material universe we find ourselves in now – were we once these kinds of “self-aware” ideas too?

Scientology work takes people back through their previous incarnations up until the moment that the universe was first created. One of the earliest periods LRH got to was called “Arslychus.” This was a gigantic civilization that existed in space, but not on any particular planet. Thousands were said to work on tedious tasks until it was blown up with the invention of “mass.” It is hard for me to picture “Arslychus” without seeing a very, very Jack Kirby spin to it. After all, LRH claimed to have “remembered” his sci-fi stories from previous incarnations.

In the same sense, what is the death of a god like this going to look like? Darkseid points out that he lives alone in the “dead world” – the end of the “Fourth World.” His absence is the absence of a god. What is the void that a dead, but once “self-aware idea” creates? On the one hand, I can’t help but think Darkseid is describing a “shell world” of the early ’70s itself, a world of gods and archetypes in America that died. I myself feel like I can stand in that particular necropolis. I lived through the period and I can recall the freshness of the dream – and trace the shadows left by its passing.

On the other hand, I wonder if all of us aren’t what remains when a god dies, falls from its glory, and tumbles, through ever-diminishing realms, into where we are now.

“I am the hole that remains when everything else is gone. The emptiness shaped like God.”

If we look up, or back, and peer through the stages of our decline, are the abysses we see above and behind us nothing more than the remnants of ourselves and our own past divinity? What happened to – and in – the realms we left behind us?