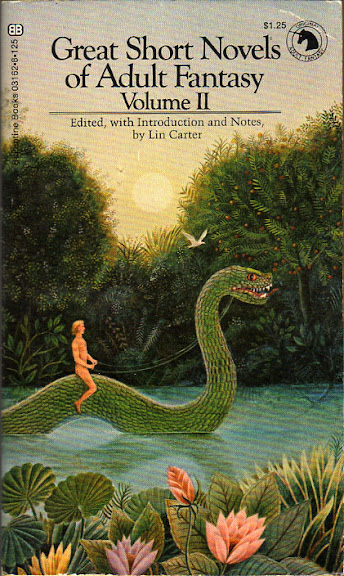 I was primed, going into D&D, by having read many of the authors on the list. My mother had read all the Baum, Prydain, C.S. Lewis, and Tolkien books to me, and I had – on my own – graduated to Howard, Lovecraft, and other popular fantasy writers that were then in vogue, or were being brought back into prominence, in the mid ’70s. When I first started playing the game, I was already speaking the language that had informed it. My eagerness to play D&D, and my initial excitement with it, was elicited by the way it seemed so perfectly geared to my own aesthetics and enthusiasms at the time. As my father might have said, “It spoke to my condition.”

Naturally, when I returned to look at the hobby, I revisited many of these books Gygax had cited and even checked out ones I had missed the first time around. A few years ago, I had made an effort to collect and read the books published by Lin Carter in his justly-famous “Ballantine Adult Fantasy” series. Since then, I have read some of the Poul Anderson books Gygax was fond of, which I had ignored before.

One of the key differences between the older players, like myself, and the kids who started playing the game later was the regard we held these early fantasy authors in. D&D, in time, became so successful that its fans and creators become influenced by earlier iterations of the game as well as subsequent books and films based on, or heavily influenced by, D&D. Earlier source materials went unexamined. In a sense, and as others have pointed out, the worm began to devour its own tail. D&D wasn’t being informed by non-D&D sources any longer. D&D was being influenced solely by D&D.

The OSR people have wisely caught on to this limited, and ultimately extremely destructive trend, and have returned to the original books that influenced the game when it started. They have “gone back to the basics” and started taking “Appendix N” quite seriously. My own return to the Carter series, in a sense, primed me for the OSR. By the time I discovered them I was already speaking their language.

I feel that, at least at the moment, the Carter series could easily be my version of “Appendix N.” There is enough Clark Ashton Smith, Dunsany, Cabell, and others in that series to make any OSR D&D campaign come alive. As an adult, I am more drawn to the pre-Tolkien writers who, I feel, are speaking to a more adult audience and have a sensibility informed more by adult experiences. I would, at this stage of my life, want my D&D to be more drawn from the work of Dunsany and Smith than from Tolkien and Howard. Adult D&D should, for me, have a more powerful, deeper, and better realized imaginative quality – derived from the kind of wonder and profound insights that caused Crowley to stick The Shaving of Shagpat on his reading list.

There is, I have noticed, a sharp difference between the D&D people citing the classic fantasy authors and those cottoning to newer writers that I have never heard of. The OSR folks tend to share my tastes in fantasy literature more or less exactly – sometimes to what I would consider to be an almost uncanny degree.

A contributor named “Finarvyn” noted one of the differences on a forum thread:

“And I don’t mean to imply that newer authors aren’t as good as old-time ones, but they have a different feel nowadays. I think that some of the older authors didn’t worry so much about being ‘PC’ and not offending anyone….”

This comment elicited a response from Rob Kuntz – one of Gygax’s closets early associates and one of the first D&D players:

“Not only that Fin, but that folks are reading less of anything overall, it seems. History and literature were part and parcel of all book shelves in the LGTSA [Lake Geneva Tactical Studies Association] days. Remember, this whole ‘Fantasy Thing’ evolves from Wargaming as well. Due to the many periods covered, that included anthropology (Gary had many such books on his shelves), period histories and many related study areas. Whereas the many authors in ‘N’ (Tolkien, De Camp, Pratt, Leiber, Lovecraft, etc.) were all heavily influenced by history, legend, mythology and current works of literature (Lovecraft discovered Smith (unmentioned in the appendix N) through Smith’s poetry, for instance, and in reading Smith’s letters or other commentaries on the times (re: Book of the Dead by E. H. Price) everyone of the predecessors who wrote fantasy or SF or weird fiction were extremely well-read in many areas outside of their preferred genre. Taint so today as it was with them or by emulation, with us in Lake Geneva. It has been my contention that this has contributed in whole or part to the slump in the lack of truly interesting ideas apparent in the field which is now many times greater in size than in those days. RE: Uninformed quantity as opposed to informed quality.”

In other words, it’s not that the kids today aren’t reading the right books. The problem is more that they aren’t reading anything at all. Haven’t we also seen this in the occult community? It speaks to a larger problem in modernity.

But what made these original authors important and influential? Nothing other than their own influences! Kuntz continues:

“All authors from Appendix N were influenced by other literature, such as folk tales, legends, poetry, contemporary fiction, film, theater and the critical discourse which took place regarding all of these. In presenting these condensations as their expressed works from such influences, EGG went for straight genre fiction relations, though with more range I might add than what is being expressed in the posts above that seem to extract the same ‘types’ out of the list’s holistic context which he presented with even his short brush stroke. The literal translation of APPENDIX N as interpreted as ‘D&D Literature’ is quite absurd from a critical viewpoint because of this. The ranges are at best distillations of the fiction-writers as part of an ongoing part of story, and story derives from everywhere in our life. Therefore, and in support of that, if one were to seriously study Vance, Lovecraft, CA Smith, one would soon find where their sources for inspiration derive from. If you had asked them if they were just this or that, they would have said no, and like any good writer would have pointed a broad finger at the classic stories and of those other related areas as I noted above. Thus opining that the APPENDIX N is ‘REPRESENTATIVE’ of D&D is a fallacy. EGG never stated that it was a definitive list, nor that it was anything other than a RECOMMENDED READING list. Just like recommended reading, its expanded use is assumed to be more or less not only a sampling of it at one level of participation, but by extension also a beginning reference for those who wish to uncover how and why such writers perfected their craft to reach such levels of excellent storytelling. More writers, publishers and critics seem to concentrate on the finished art of these writers than what ACTUALLY INSPIRED THEM to write these stories and to perfect while doing so their craft. That’s a grave problem, because, as you see, the more one imitates a form which was singularly inspired to begin with by all facets of fictional storytelling, the more the uninspired/uninformed writer or designer and his or her work becomes watered down in imitation or worse. These greats became great by studying multiple and varied facets of their craft, not by studying and templating each other or one particular form or genre. They were inspired by each other – but to compete to do better, not imitate. A big difference between gaining and keeping originality or paling by comparison in rehashed, pitiful examples so apparent today in both fiction and RPG.”

Kuntz’s points, here, draw our attention to the larger problems of decadence and nihilism in modernity. The less people read and study, the further down the spiral things go. Friends of mine have pointed out that the original gamers brought more to the games than other games. They had lived real lives, had varied experiences, and had made wide studies in many fields. These backgrounds informed their perspectives and vitalized their creativity. Today’s gamers are far more limited and can’t seem to get out of the boxes they are are stuck in. They are either too lazy or too conformity-oriented (or both) to bring anything new and different into their games and their writing from the outside. The OSR people realize this. The other gamers do not.

I would, of course, argue that all of these points and criticisms apply to the occult and magical communities too. Most magicians and occultists don’t read any longer either and, when they do, they don’t study texts outside their narrow and every limited set of interests. One lame occult beginner book influences the direction of other lame occult beginner books. The sort of broad range of study and the motivating curiosity that magicians like Crowley and C.F. Russell simply took for granted is nowhere evident.

Some have wondered why Clark Ashton Smith wasn’t mentioned in the original appendix. Kuntz supplies more on that question here.