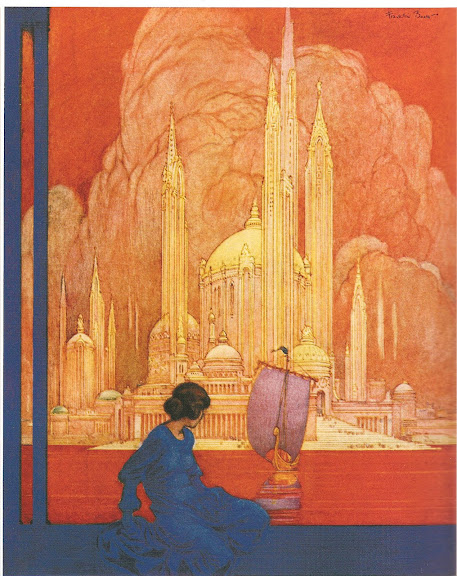 There’s a review of the original Wilderlands D&D campaign setting, produced by the Judges Guild back in the ’70s, over here. As a big Judges Guild fan, I had this setting and the others that went with it. I used to lay out all the maps that came with them in my bedroom and see how they connected to each other. It was awesome! 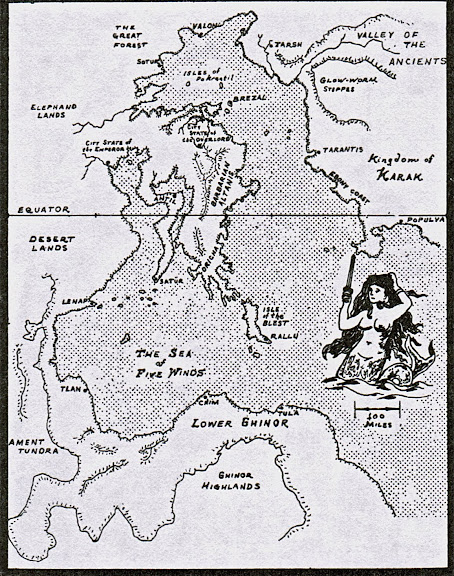 “The Wilderlands comprise an area slightly smaller than the Mediterranean sea and surrounding lands. The Wilderlands are largely unexplored and overland travel is dangerous. There are few ‘nations.’ Instead, the lands are dominated by ‘city states,’ principle among them being the City State of the Invincible Overlord and Viridistan, the City of Spices—also known as the City State of the World Emperor.

“Though the civilization of the Wilderlands centers mostly on the largest city states: Viridistan, the City State of the Invincible Overlord, Tarantis, Valon, Rallu and Tula, these locations are small in comparison to the vast forests, expansive plains, open seas, trackless deserts, imposing mountains and wild rivers. The light of civilization in the Wilderlands is a dim spark against the dark wilds. Long ago empires covered the region. But great wars, with the gods themselves fighting alongside men, has reduced the splendor of those past civilizations, leaving them in ruins. The most recent such war was the War of the Pious and Philosophers, pitting the followers of magic against the followers of science. That war was some 6000 years ago (though that date is disputed). Cities that do exist today are generally built on the sites of ancient cities, some among the ruins themselves. Broken roads, crumbled walls, sunken buildings and half-ruined towers dot the landscape, a constant reminder of the faded past.”

“Life in the Wilderlands can be summed up for the average commoner as follows: Solitary, poor, nasty, brutish and short. The average life expectancy is twenty years unless one lives in a walled city or town such as the City State, Viridistan, Thunderhold, Modron, Warwik or other large cities, in which it is only a little higher. Almost all Human families produce at least ten children, of whom two or three may live long enough to have children of their own. In the wilderness villages, wandering monsters and the raids of nomads, brigands and various humanoid species which are inherently evil are the bane of many. Rampant, unchecked disease is common to both walled city and wilderness village; so is infant mortality. The dangers of wandering monsters are lessened in a walled city or town, but the concentration of people in a small area leads to a high crime rate and poor sanitation; therefore, instead of being slain by a marauding dragon, a city dweller may have his throat slit for the contents of his purse. Few men manage to live past the ripe old age of thirty-five, and the fact that a man is fifty or sixty years old indicates great wisdom on his part (or an incredible run of luck).”

“Welcome to the Wilderlands, where life is cheap, travel is dangerous and a strong sword arm is worth more than a purse full of gold!” 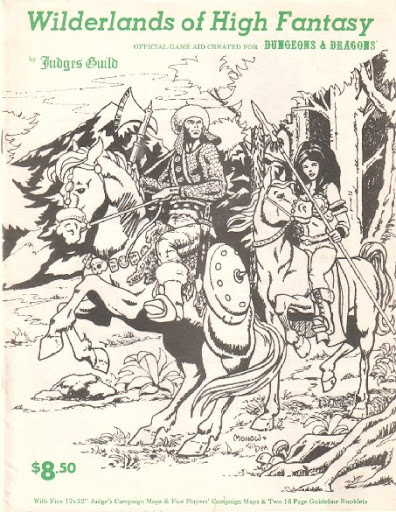 The Judges Guild used this grand, integrated setting for many of their modules and articles. Their three “City States” were all located within it, and many other smaller parts were detailed as well. But despite this work, a lot was left up to the individuals using the equipment.

This line from the guide says it all:

“All within are merely inspiration for the active and pontifical judges of the guild. Please alter, illuminate, expand, modify, extrapolate, interpolate, shrink, and further manipulate all contained to suit the tenor of your campaign.” 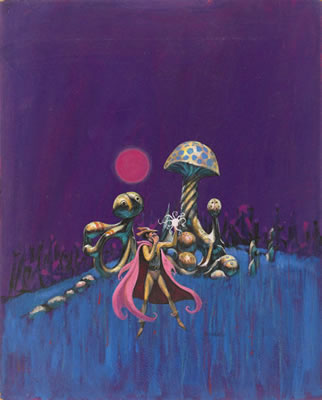 People have, over the years, followed this instruction and have developed their own, individualized versions of the Wilderlands. “The Majestic Wilderlands” is one such iteration. You can buy it here. I own it. I think it’s great. Conley’s version is more divided into zones of control and little countries, but his mythological origins of the various races within the setting are succinct and brilliant. This version dvides each major area as a separate kind of adventure setting – one for ancient Greek adventures, one for Ice Age, or prehistorical adventures, another for Egyptian type encounters, etc. Conley’s version of the Wilderlands is large enough to include all of these possible options and players within the campaign can sample them at will. 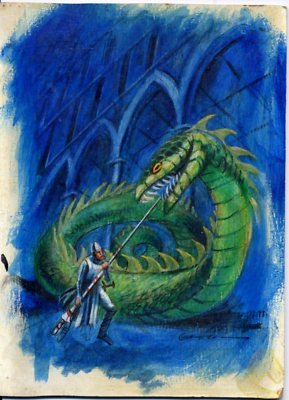 Other versions came out that spelled out their own take on the terrain and the atmosphere. I liked this description:

“The Wilderlands of the City States are dangerous places. Each community tends to become self-sufficient to a large degree simply because the danger of wandering monsters prevents the forming of political, social, or economic bonds with neighboring villages.”

This kind of understanding seems to me to be closest to the idea of the the original D&D game – in which the population is sparse and large nation states are rare – simply because the vicious “monster ecology” forbids their development.

The original mythos of the Wilderlands included a race of departed super beings – the Markabians. Sharp-eyed readers will recall that these characters figure in the Co$ theology too! They add a science fantasy, alien, “‘Chariots of the Gods’ Meets Cthulhu” element. 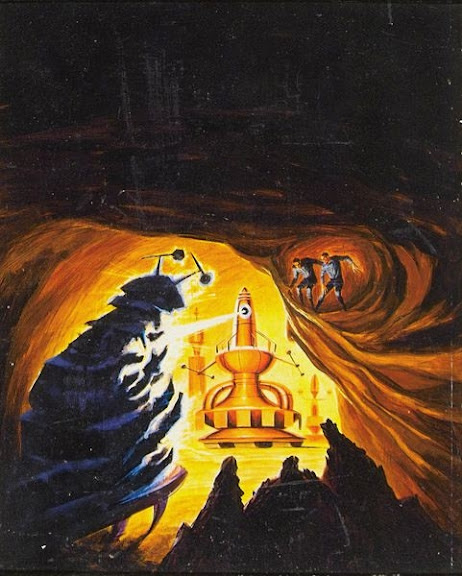 There’s another version of the Wilderlands over here. Scott Driver’s version is heavily influenced by Clark Ashton Smith.

“The City State of the Invincible Overlord is an ancient, decadent metropolis surrounded by howling wilderness and ruled by a grim tyrant. Its precincts are prowled by grasping merchants, ruthless slavers, cunning thieves, hollow-eyed whores, and the ululating thralls of weird cults. Beneath its cobbled streets and reeking sewers lies a sprawling labyrinth teeming with foul creatures and brimming with forgotten treasures and forbidden lore. 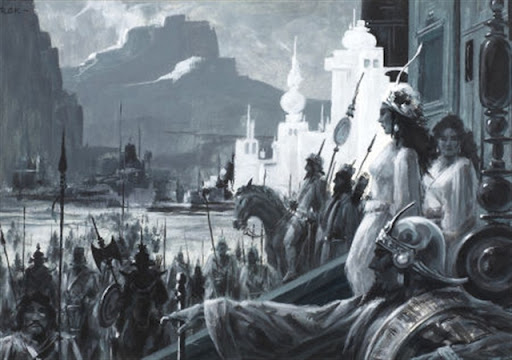 “Even in these last days, some few stalwarts cleave to such outmoded ideals as honor and heroism, fanning the embers of what little hope remains. Others scrabble in the ashes for some vestige of wealth and glory, or at least a chance to spit in the pocked face of the guttering sun. Heroism is, in the midst of the pervasive rot and baroque decrepitude, a relative term.”

That’s worth checking out. Also see his piece on the sexual mores of this campaign here, and on one of the groups of cultists within the City State here. 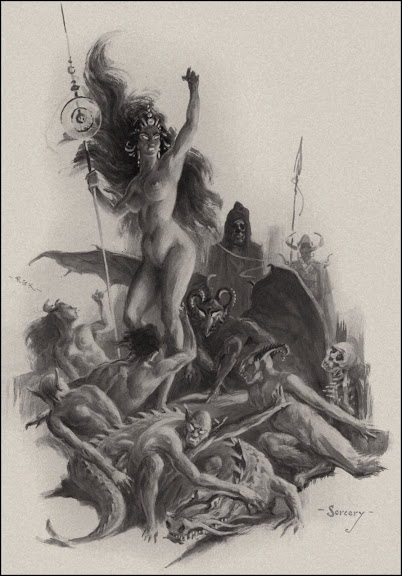 The creativity here is what I admire – taking the materials and twisting them around to suit your preferences. The original City State had its milder elements, and I enjoyed it at the time. But, as I have aged, I find myself moving closer to the darker, Driver version of decadence, despair, and roiling chaos.